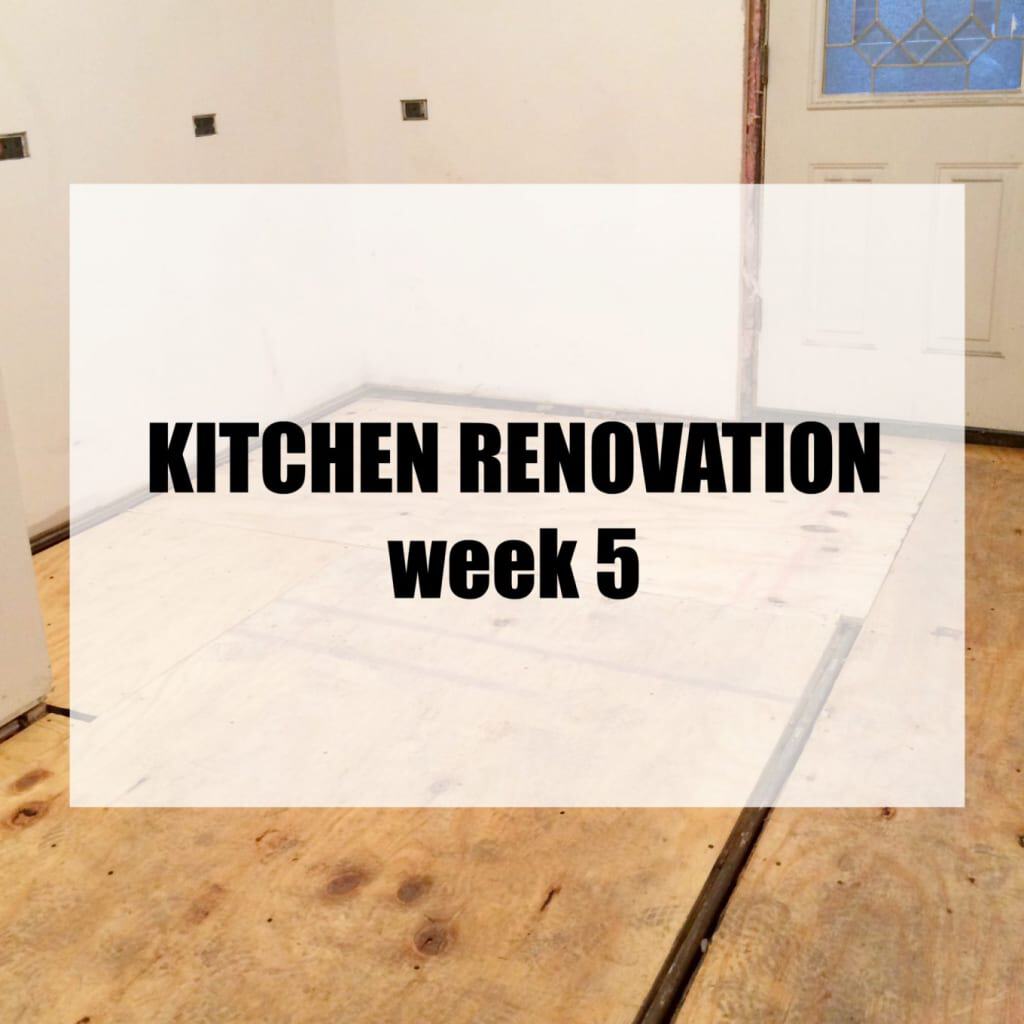 We’re back with part II of The Great Floor Saga. Spoiler: it’s not so great. If you missed last week’s post, the Cliff’s Notes version is: pipe leaked during demo/soaked dropcloth/moisture absorbed into wood floor/wood warped beyond repair/floor we weren’t planning to replace has to be replaced. This week, it got replaced.

The first step to getting a new floor (besides removing the old floor, which happened last week) is to replace the subfloor, if it is in bad shape. Ours wasn’t, but is original to the house (so about 100 years old) and the contractor decided it could use a helping hand. So, the crew installed a layer of plywood over the subfloor for strength and stability – basically, it alleviates the creaky, squishy feel that you’re probably familiar with if your house was built before 1930. 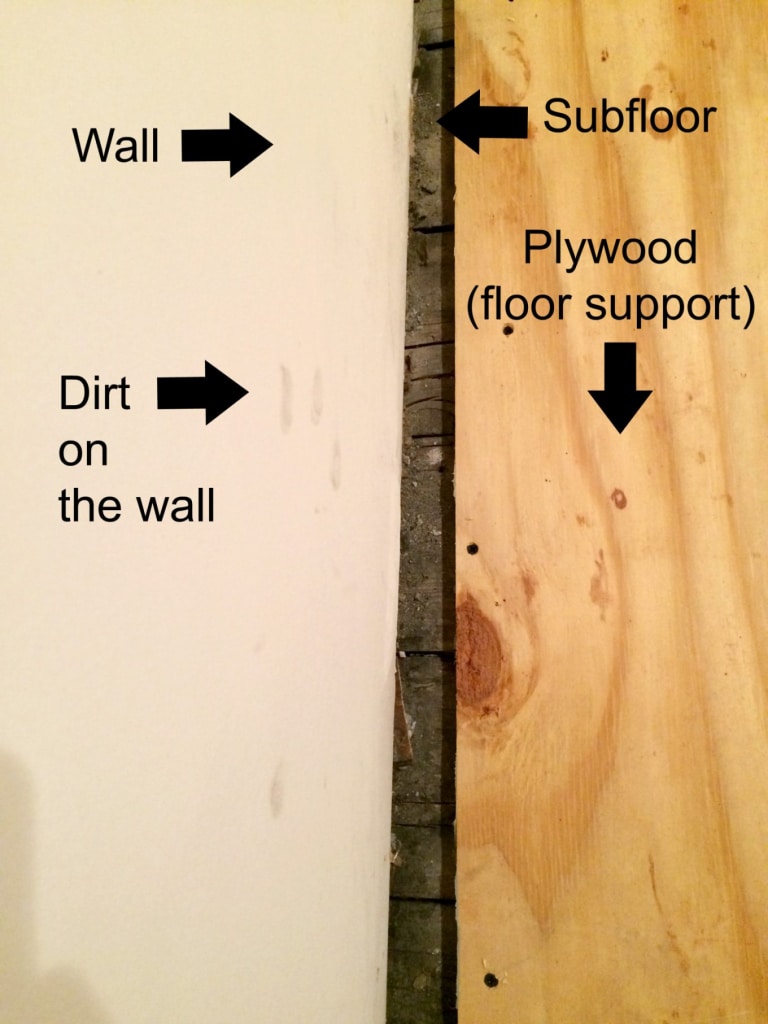 This is what it looked like when it was done (that space down the center is an electrical conduit): 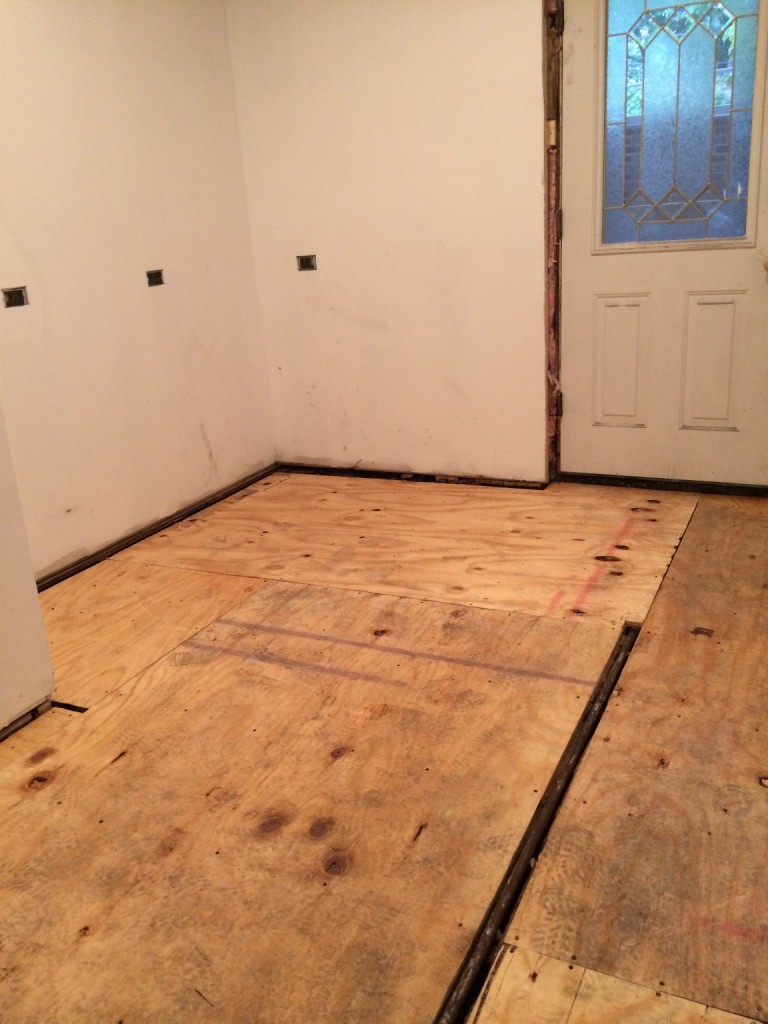 Since they finished the pre-floor work the previous day by noon, there was a long lull before the floors were laid on Thursday. But I did get a (not so pleasant) surprise when my neighbor texted me “your cabinets arrived?” – which I misinterpreted as a question about progress, but which he meant as “your cabinets arrived (on a huge semi wtf)?”. That was an adventure. The freight company had the wrong address so they figured out where the warehouse was and – I can only assume – delivered the cabinets there after all. I haven’t had time to worry about where the cabinets are, because I’m still hung up on how on earth the driver got a full-sized semi onto my city block. The world may never know. 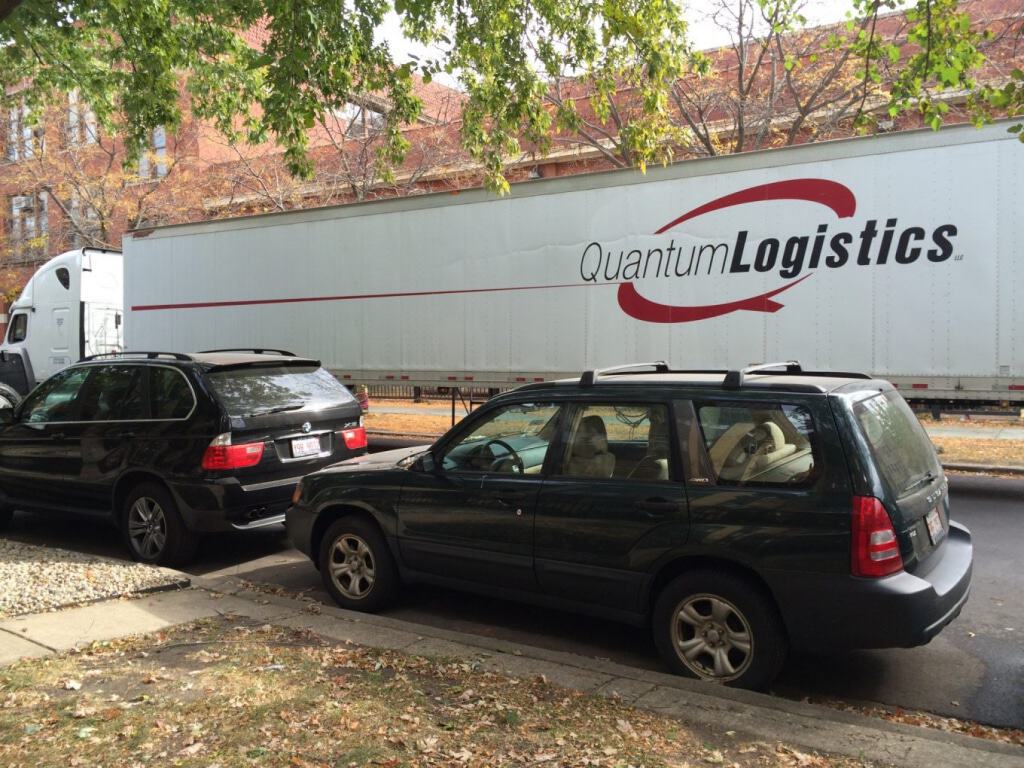 Nothing happened. Not even any surprise semis!

The floor guys arrived and promptly began sawing into the floor in a way that sounded terrifying. But they were actually removing some of the old boards in the room adjoining the kitchen that were damaged and/or interrupted the flow. The idea is that when the new boards were laid down, the kitchen would flow seamlessly through the house without the abrupt change that was there before (which you can see in older posts). 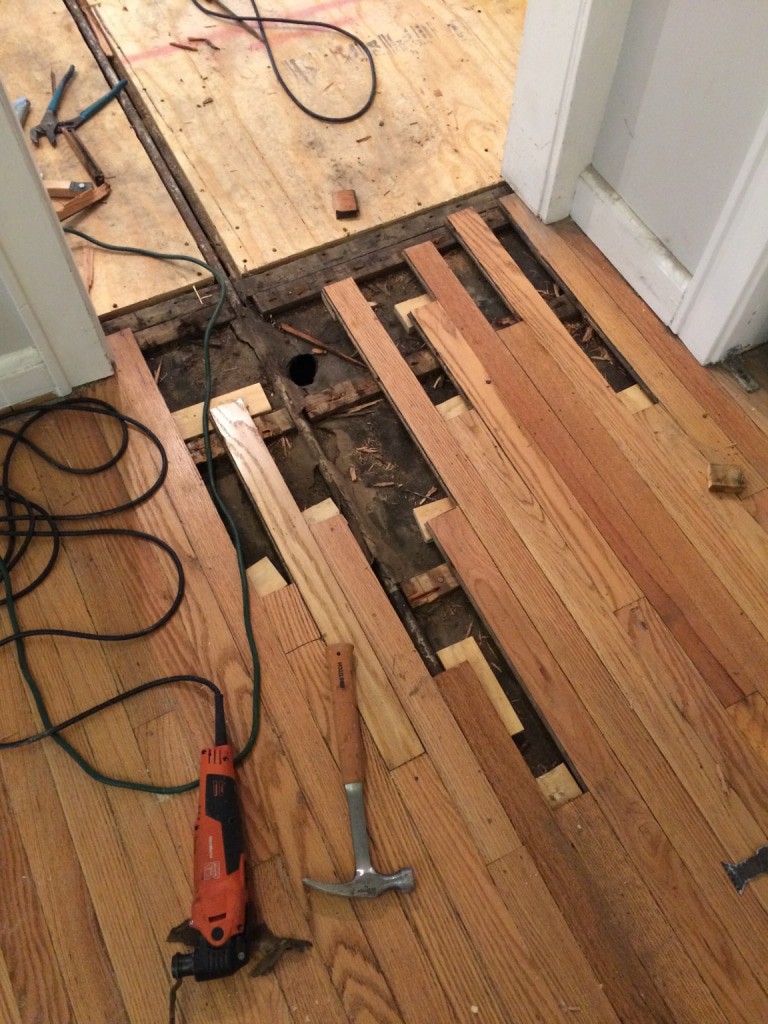 The result was exactly what they were aiming for, and what I hoped it would look like. The only difference between the old floor and the new one is that the new one is cleaner. The polyurethane finish that they’re going to put on the floor should mask the difference even more. 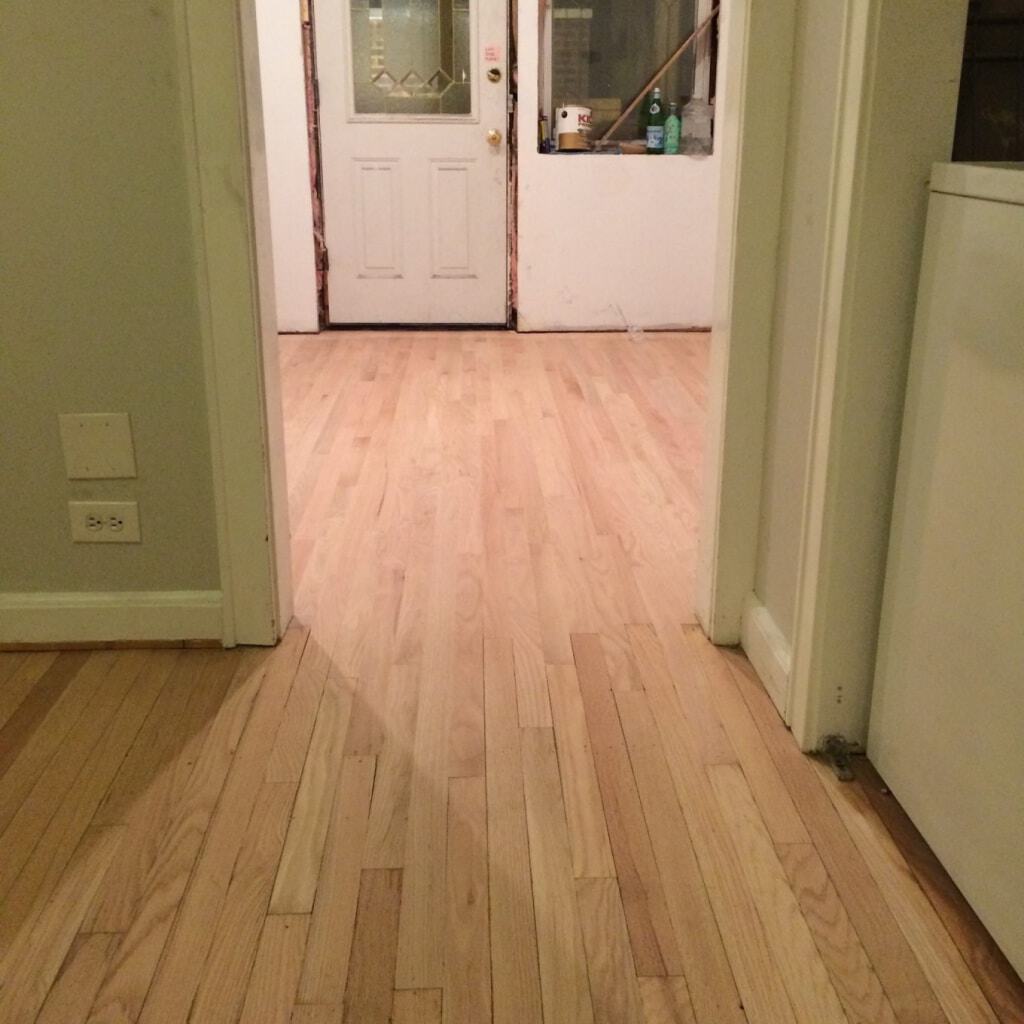 Here is what the wood looked like before it was poly’d – very new, and very raw (below). I’m hoping it will take on a grainier, aged look once it’s finished. 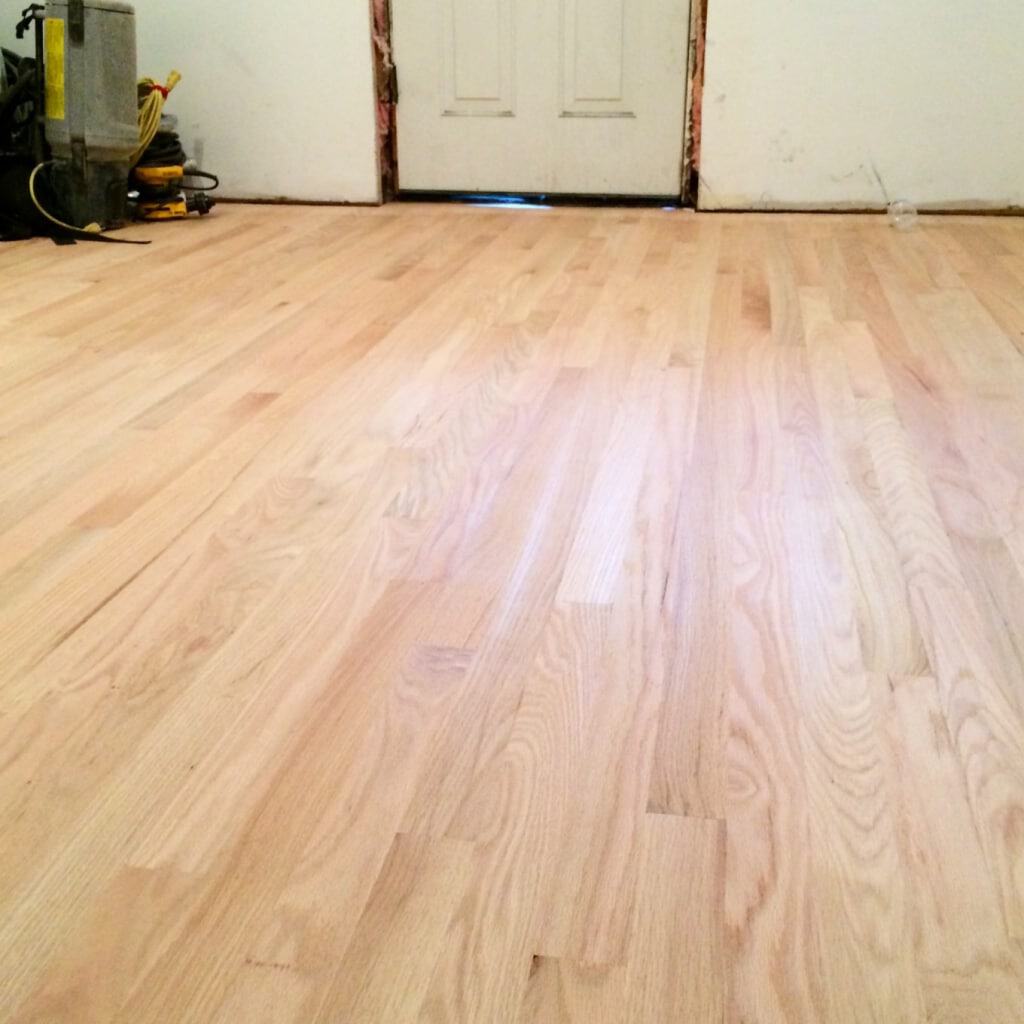 The first coat of polyurethane went on to the new floor today and my house smells like a paint thinner factory. They will do one more on Monday morning before the cabinets are installed next week, then another (final) coat after the kitchen is complete. 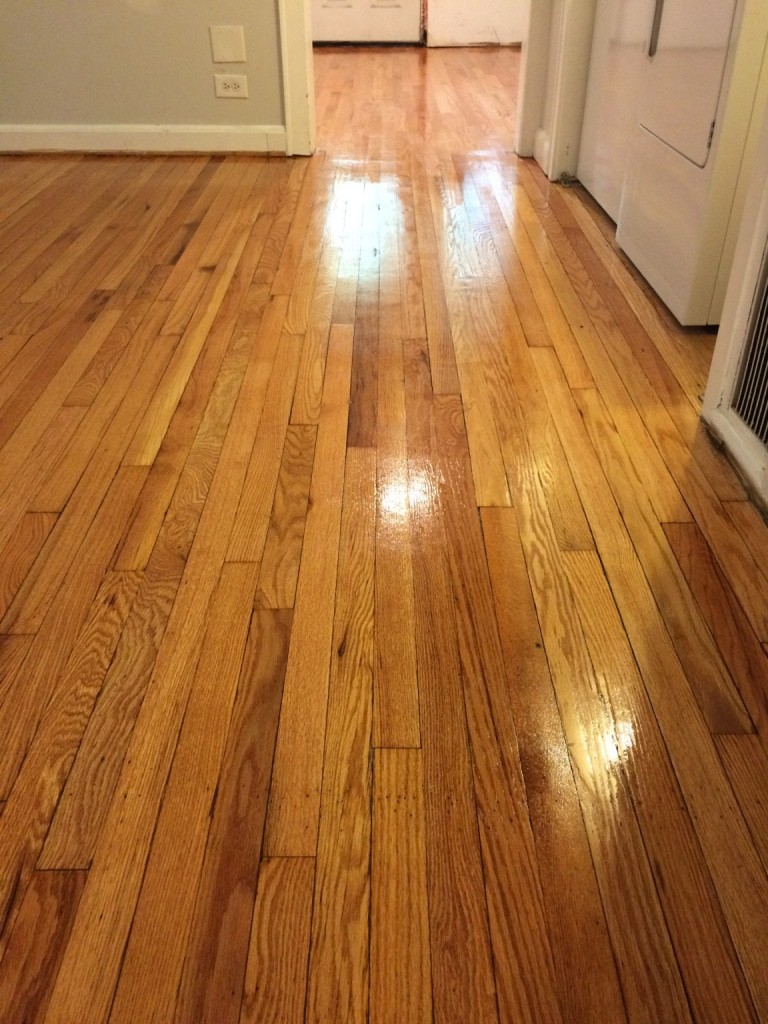 Come back next week for…. hopefully, but I don’t want to jinx it… cabinets!