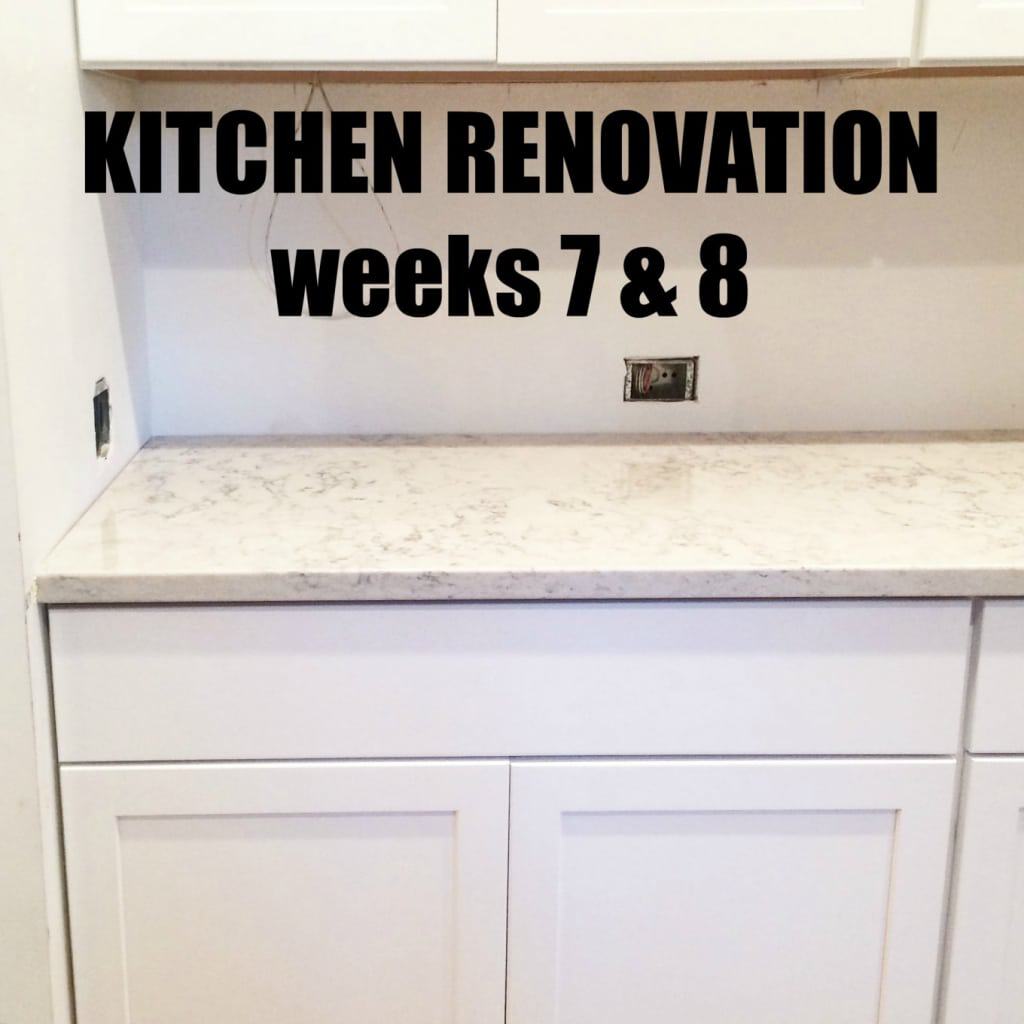 The progress these last couple of weeks has been both excruciatingly slow and jump-up-and-down exciting.

Over the weekend, we finally solved the countertop conundrum. We were able to borrow the floor sample from the countertop retailers and thank goodness we did because it ended up not working at all. It’s amazing how different white pigments look in different light and it really is crucial to look at the materials in your space, under your light.

At the warehouse, the sample we looked at was next to a window and looked like a crisp, pure white base color because it was bathed with cool natural light. At home, under the mostly-artificial overhead lights (there isn’t as much natural light in the kitchen as I’d like, but it is now incredibly well-lit. Hooray!), it looked off-white and clashed with the cabinets. Actually, it didn’t so much clash as just look sloppy. It looked like we picked out stuff we liked – cabinets in one context, and the countertop in another – without thinking about the cohesiveness of the design of the room. So, we ended up going with a slightly darker design that looked too dark at the store, but provided the perfect amount of contrast in our space, under our light, in between the crisp, pure white cabinets and backsplash tile. 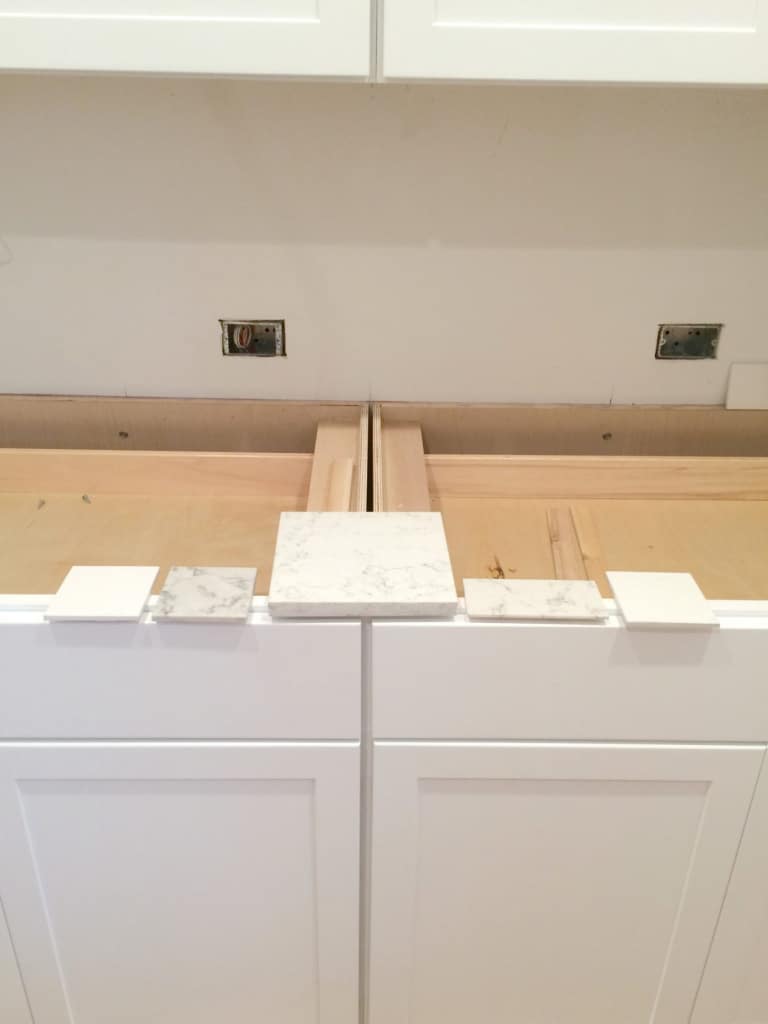 After making the countertop decision on Monday, we put in our order on Tuesday. After all the paperwork was signed and we  gave them our credit card number to pay for it, we sat back and waited for the order to process and for them to call us with the scheduled delivery date. 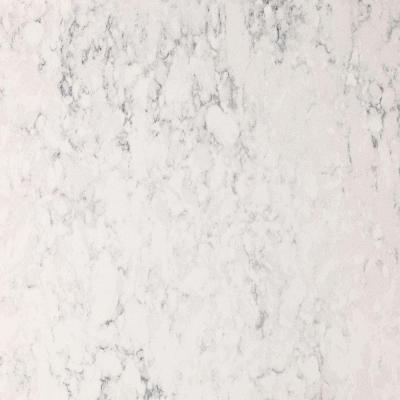 The new door and window arrived! That’s it though; they literally were delivered and nothing else. 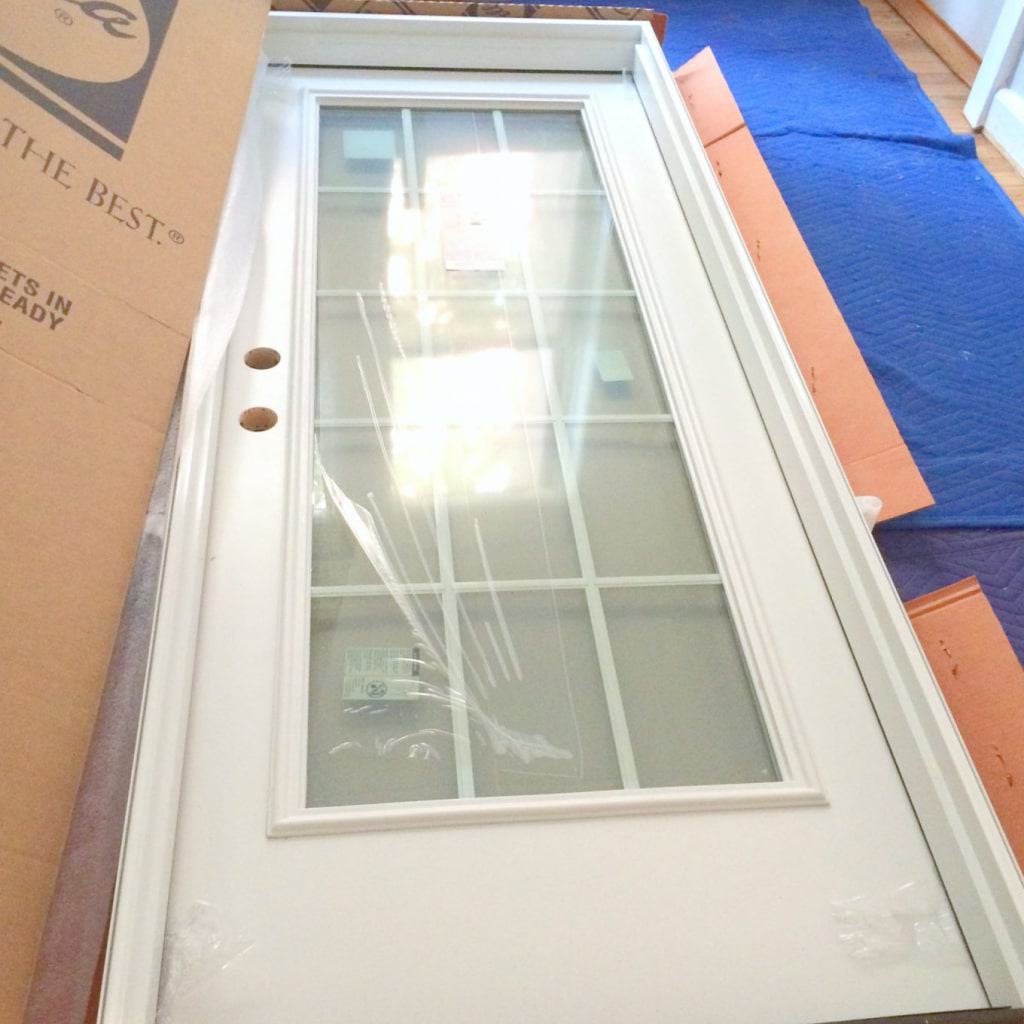 This was the only day this week that anything really got done. The contractor and one of his assistants arrived early in the morning and started tearing out the old door, door frame, window and window frame in order to install the new ones. The old window was in decent shape but had this horrible design etched into it that didn’t go with anything else in the house, nor was it my taste. So it had to go. More importantly, the old door let in very little light because it only had an upper window, most of which was obscured by frosted glass and the metal that held together the (also not my taste) glass design in place. So that was kicked to the curb as well. 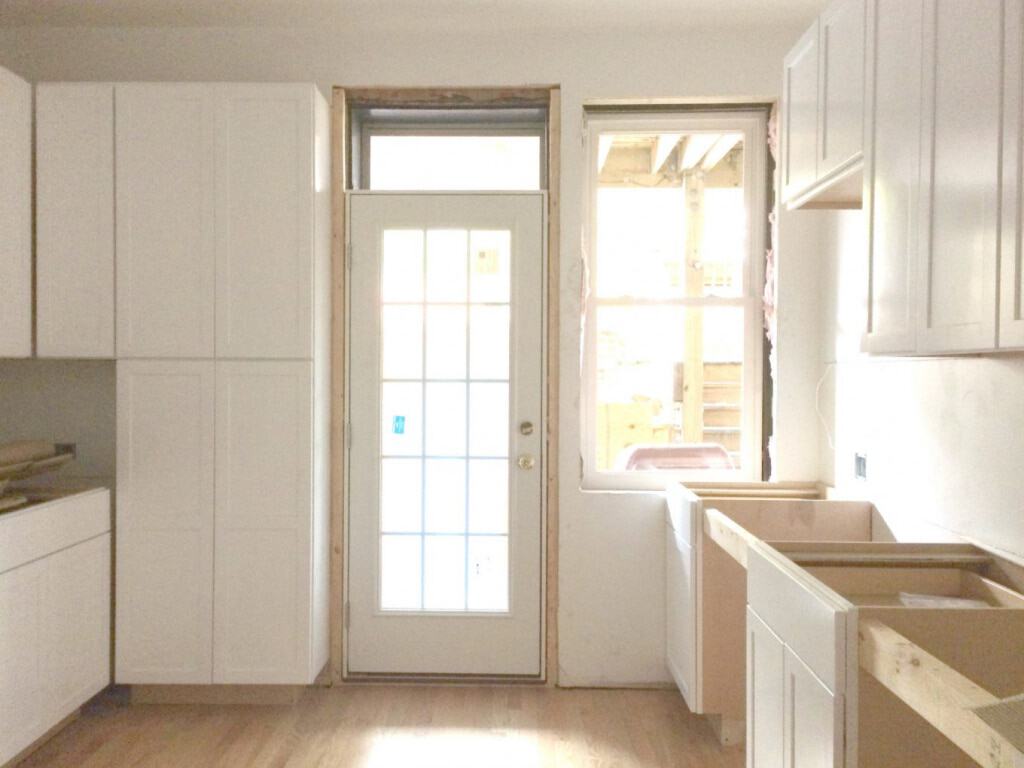 The result was a massive improvement in the amount of natural light that entered the kitchen, since the new window was slightly bigger and the new door is all glass. 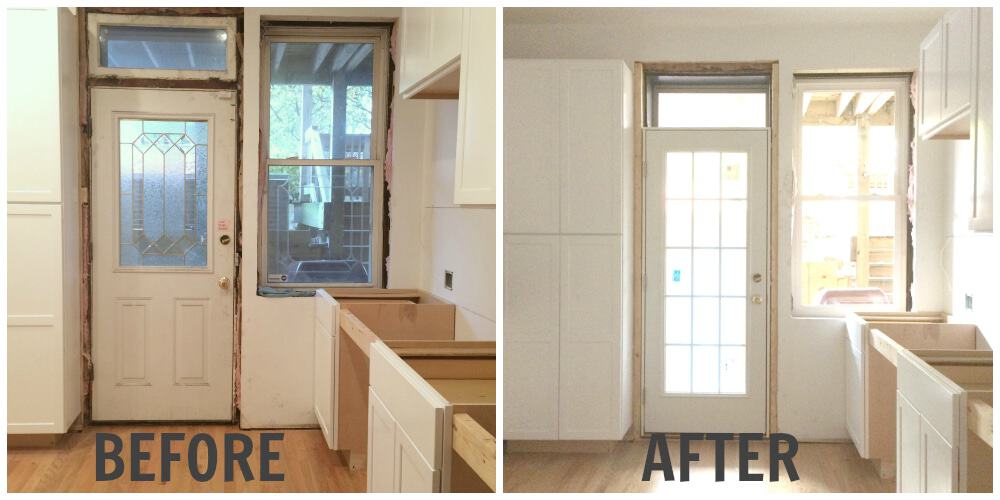 In order to really maximize the amount of light (which, due to the orientation of the kitchen in the building and relative to the garage and backyard, is not a lot) and airflow (which is also critical due to the number of times I burn things on the stove or drip things on the floor of the oven which, in turn, burn and smoke) that we get, the contractor is also going to restore the old transom (little window-y thing above the door) so that it works. It’s a nice feature to have, but it is also one of the very few original features still left in this 100 year old home and it’s really important to us to preserve that bit of the history of the unit.

Once the window and door were installed, we had basically exhausted the list of things that could be done until the counters were installed, so we knew there would be no action today. Or, so we thought! Nothing got done, but I did get the call from the countertop fabricators, who told me that the installation was scheduled for next Friday.

Let me just repeat that:

That’s only a week away. We were warned, and prepared for the possibility, that we would have to wait at least two and possibly three whole weeks from the time the slab of stone (that they’ll cut into the countertop pieces we need) is ordered from the manufacturer and delivered to the fabricator (the people who do said cutting), so by this point, I had pretty much given up hope of having a kitchen in time for Thanksgiving. Now, I will get my oven a full week sooner!

Needless to say, it was the first good news in awhile, and a great way to end the week.

One of the many frustrating things about living without a kitchen for this long is that the closer you get to the end of the line, the more of a waiting game it is. Nothing happened all week as we waited for the countertops. It seemed to me that there could have been activity – the old window still needed to be removed and filled in from the outside, the outlets needed to be wired, and there is still a spice cabinet that hasn’t been installed – but I also understand that the contractor and his team are working on multiple projects at once, so it doesn’t make sense for them to come over for just an hour or two of work. At least, that’s what I am telling myself to prevent myself from going completely crazy.

The countertops arrived! From the date they were ordered, we expected it to take up to three weeks for delivery, but it only ended up being a little over a week. That was the first lucky break we’ve had in… well, awhile. And when surprises are on the magnitude of the entire floor has to be replaced, you take what you can get in the good news department. 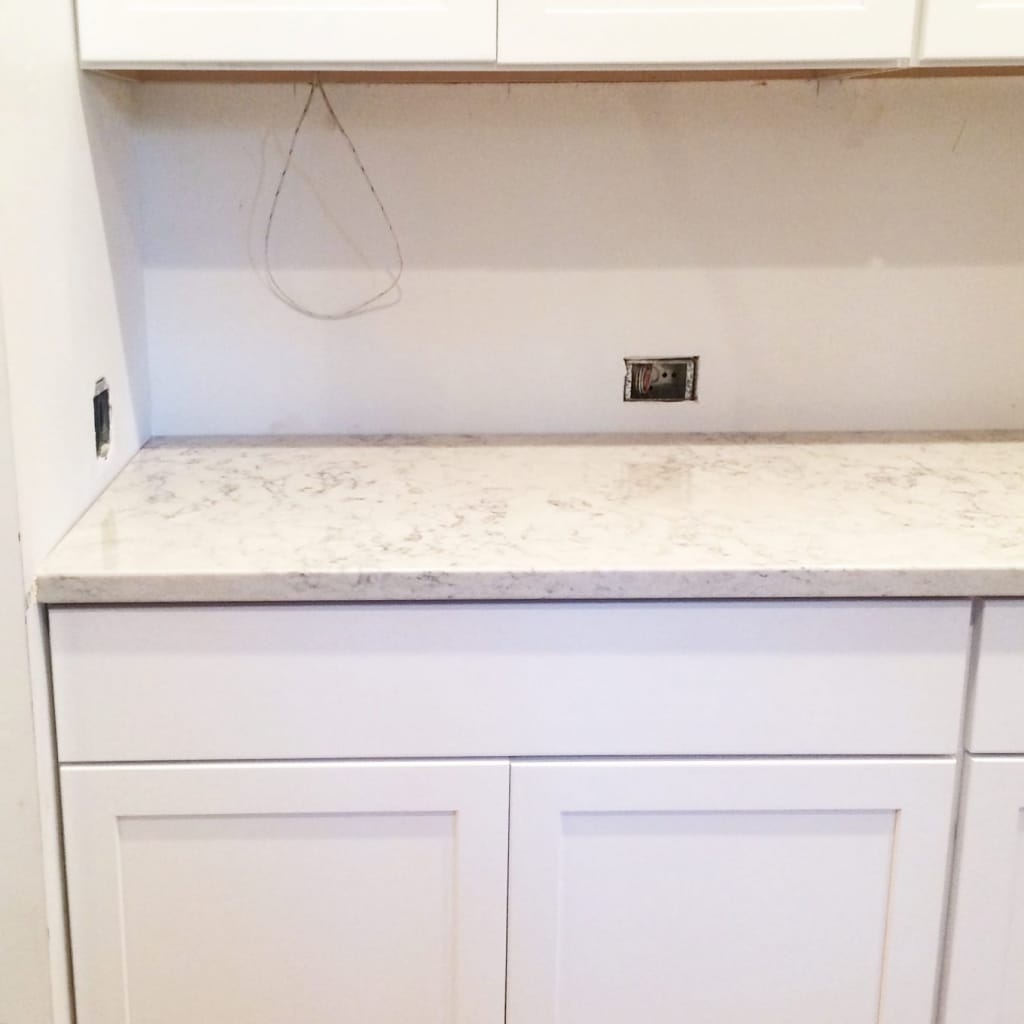 For the first time, it is starting to look like a real kitchen. For real, this time, though. Not like when the cabinets arrived and it stopped looking like a black hole. Therefore, because progress will likely continue to happen in fits and spurts from here on out, and to maintain the element of surprise, this will be the last kitchen update until The Biiiiiiig Reveeeeeal! (<— Say it with an Oprah voice), which will ideally happen before 2016. 😐 But the good news is that the functional parts of the kitchen should be up and running in the next week or so, so that means we’re just days away from real meals! Fingers crossed!