It’s been a whirlwind couple of weeks, between a a road trip to Iowa, Colorado and Nebraska a couple weeks ago and a trip to Montreal last month. Montreal is a city I have wanted to visit for many years, and it’s such a quick flight that I am not sure why we didn’t go sooner. But hey, better late than never.

The trip was over Memorial Day weekend, in honor of Bryan’s birthday and also secretly in honor of my fleeting ability to speak French and desire to stumble through some basic phrases for a weekend if for no other reason than to reassure myself that I still “got it”. No matter why we were there, it was an amazing weekend in a wonderful city. 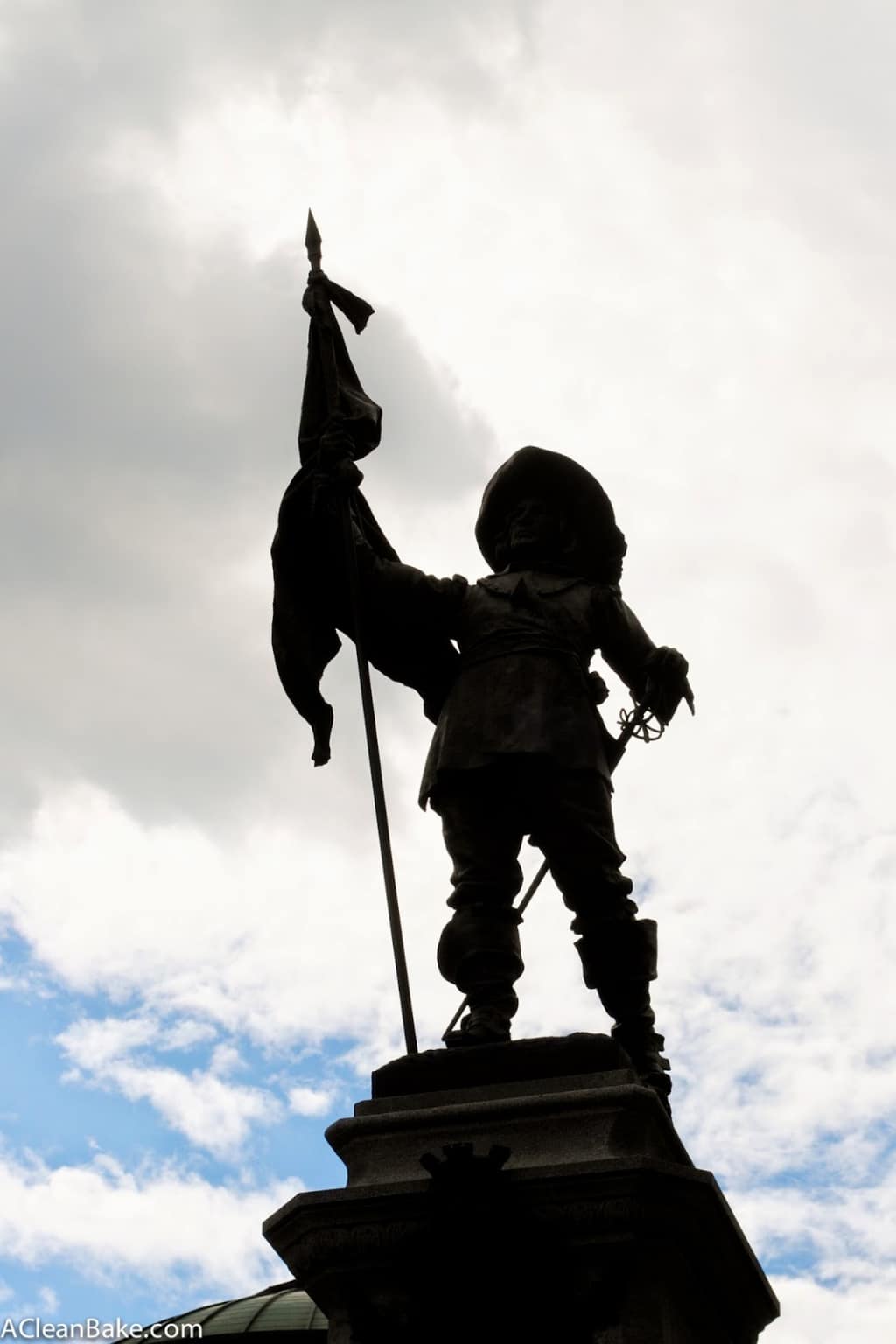 The architecture was very Parisian, especially in the Old City, but the city was not as dense and serpentine as Ol’ Pareeeeee, so was much easier to navigate. Also, all Montreal citizens are bilingual and their English is perfect, so communication was much easier than it is in France. Oh, also, the weather cooperated for the only full day we were there – hooray! And merci, Canada. 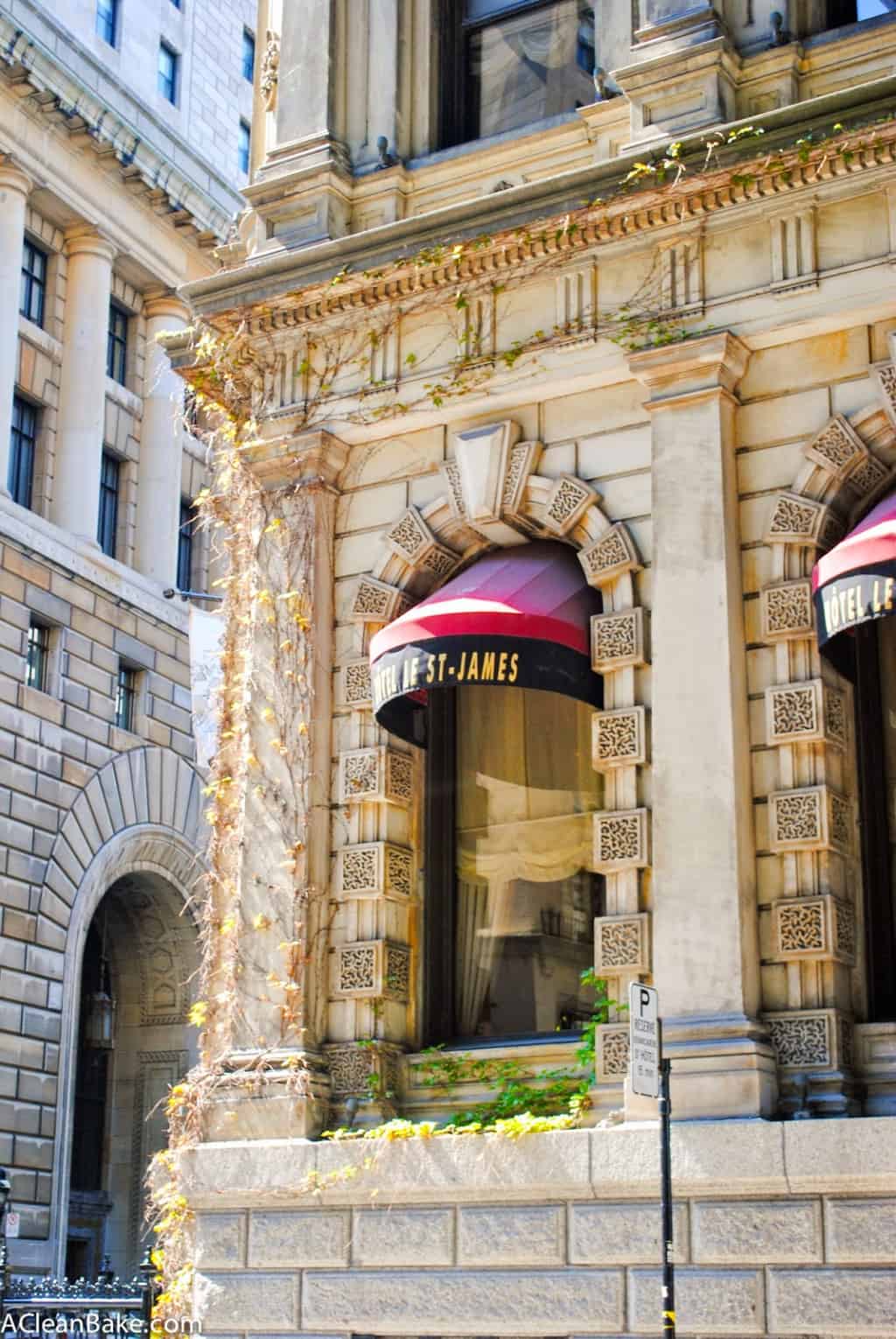 The centerpiece of the Old City is the gothic Notre Dame Cathedral which looked eerily similar to the Parisian equivalent, although a little less ornate. 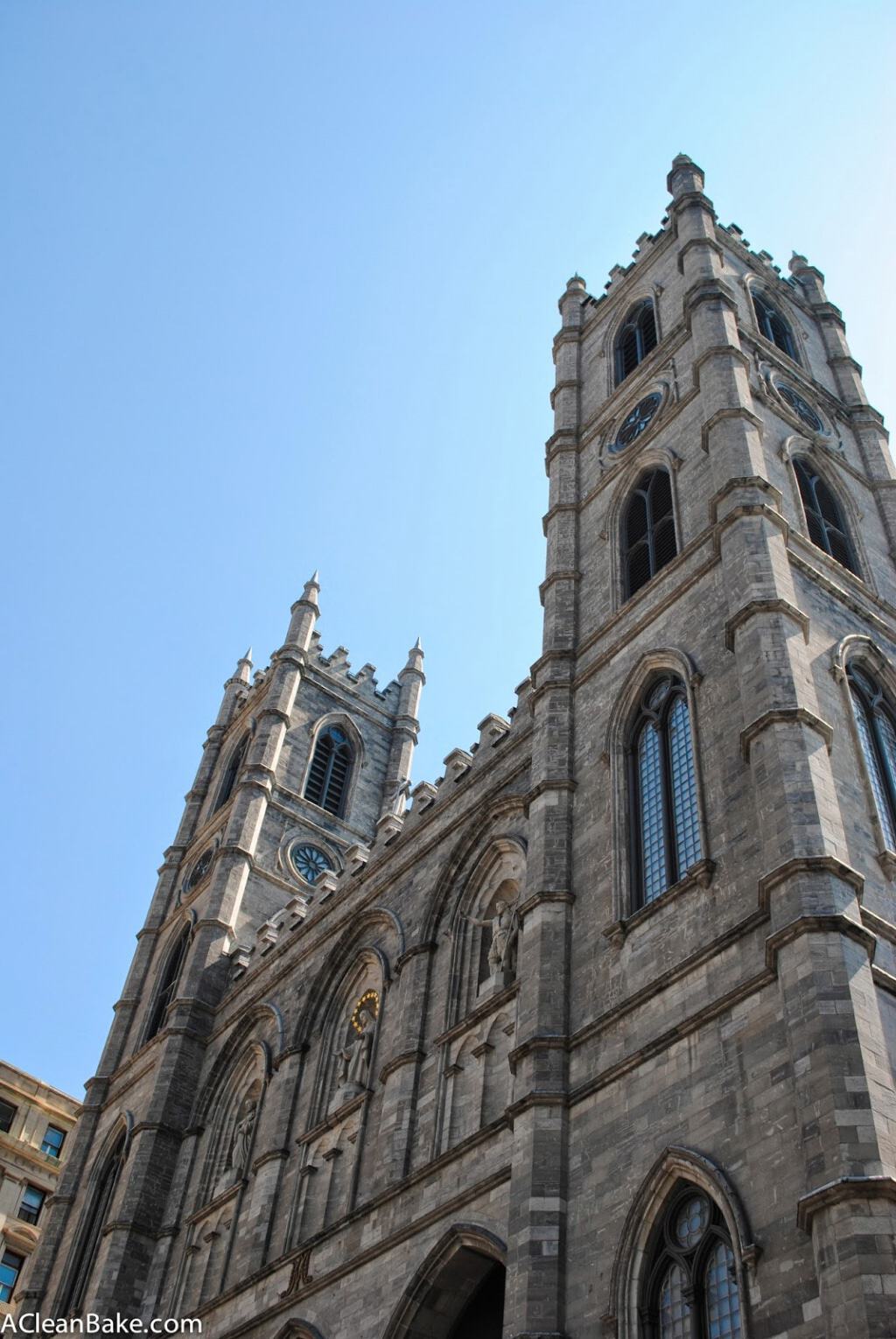 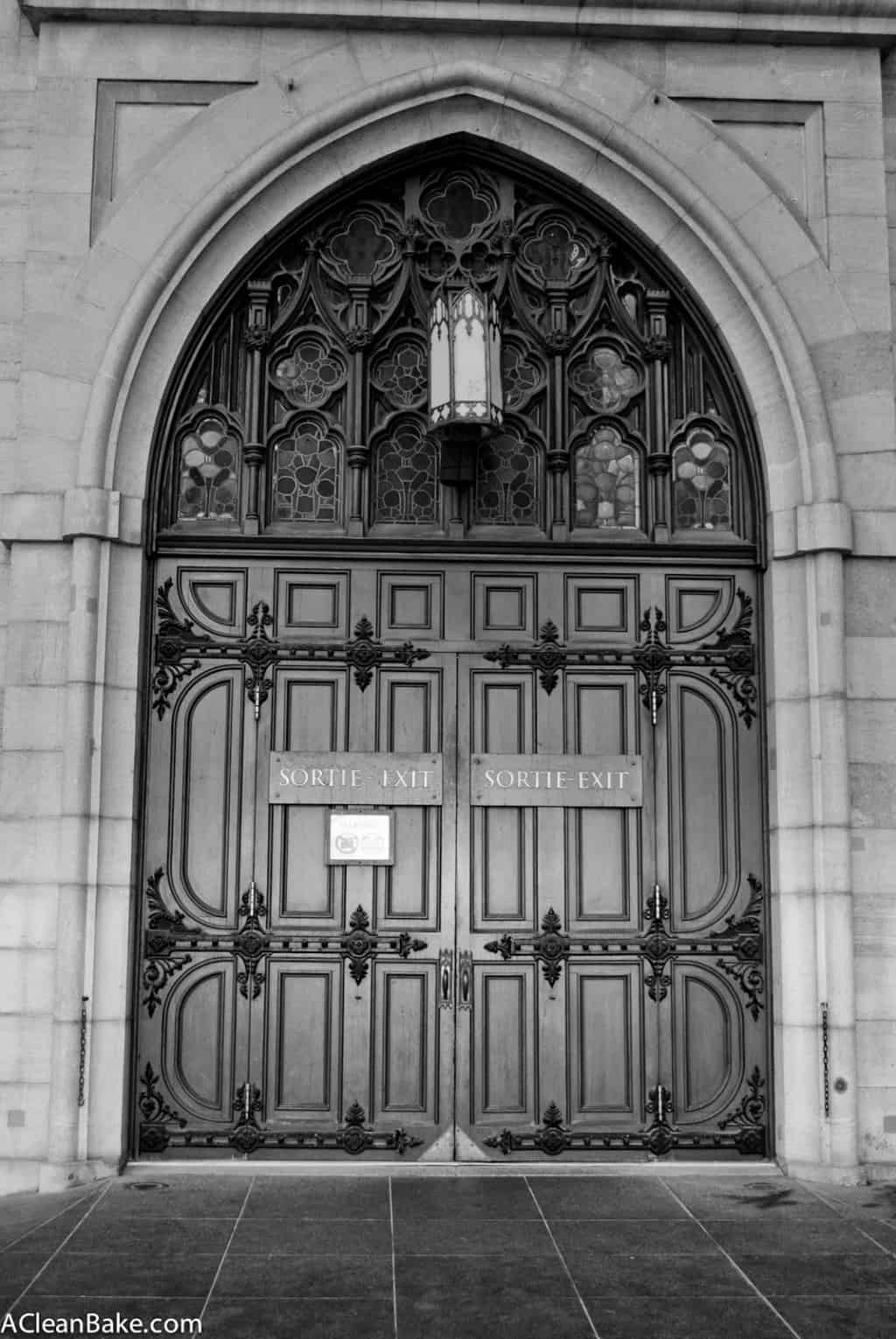 Inside the Cathedral:
And, coincidentally, they were filming a movie just outside the Cathedral, so we got to lurk and gawk, er sit and watch, for awhile. There were tons of extras walking around in full-on 60s outfits, but the most fun things to see were the “antique” cars and Vespas. 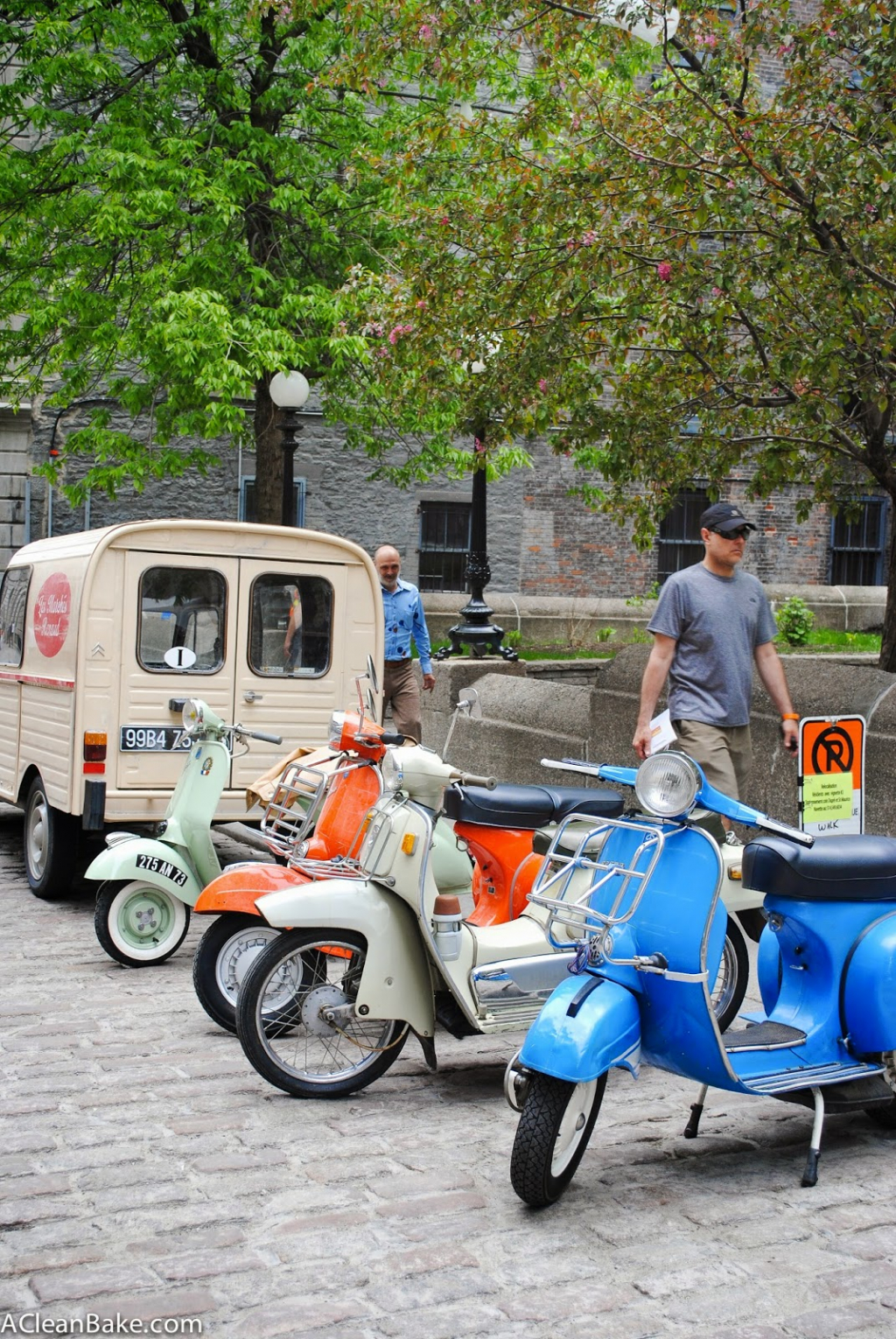 We walked around for several hours every day, and, of course, all this walking meant we were in need of lots of fuel. We ate well, although a few meals were less than stellar, and had a chance to try Poutine (fries covered with gravy, cheese curds, and usually other toppings), some local beers, maple everything, and of course….. 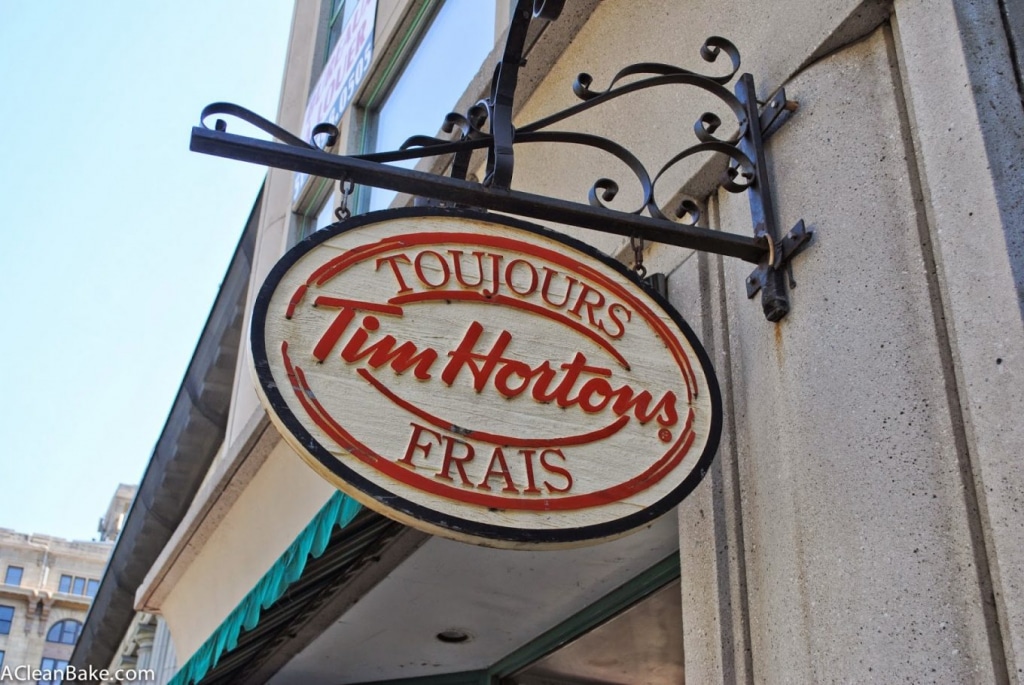 Timmy’s!
I have heard and read the raves, but I am not a big fan of mass produced doughnuts and fast food coffee. While the doughnuts weren’t bad (in a blind taste test, I couldn’t distinguish between a Tim Horton’s doughnut and one from Dunkin’ if my life depended on it, though), but the coffee was actually spectacular. I drank it black and it was delicious.

Our hotel was in the tourist-y Old Montreal neighborhood, but we hopped on the subway and headed up to a neighborhood near McGill University, which had much more interesting independent shops and restaurants, including an amazing vegan restaurant called Aux Vivres. In a meat-and-potatoes town (actually country), this was a really big deal, and I never would have believed that it was worth a shot except that Davida recommended it, and I trust her judgement. She was 110% right.

Aux Vivres introduced me to the wonderful concept of a Buddha Bowl, which contained brown rice layered with all sorts of fresh veggies like beets, carrots and sprouts, plus baked tofu and an incredible “honey” mustard dressing. I could eat this dish every day and never get sick of it (sorry for the crappy picture; we were sitting in a dark corner of the restaurant).
Then, it was off to fulfill the real purpose for the trip: Bagel tasting. Ever since I heard about the famous Montreal style of bagel-making, I have been dying to try one. There are two bakeries whose products compete for the title of best bagel in town, and Fairmount Bagel was, frankly, the most convenient. 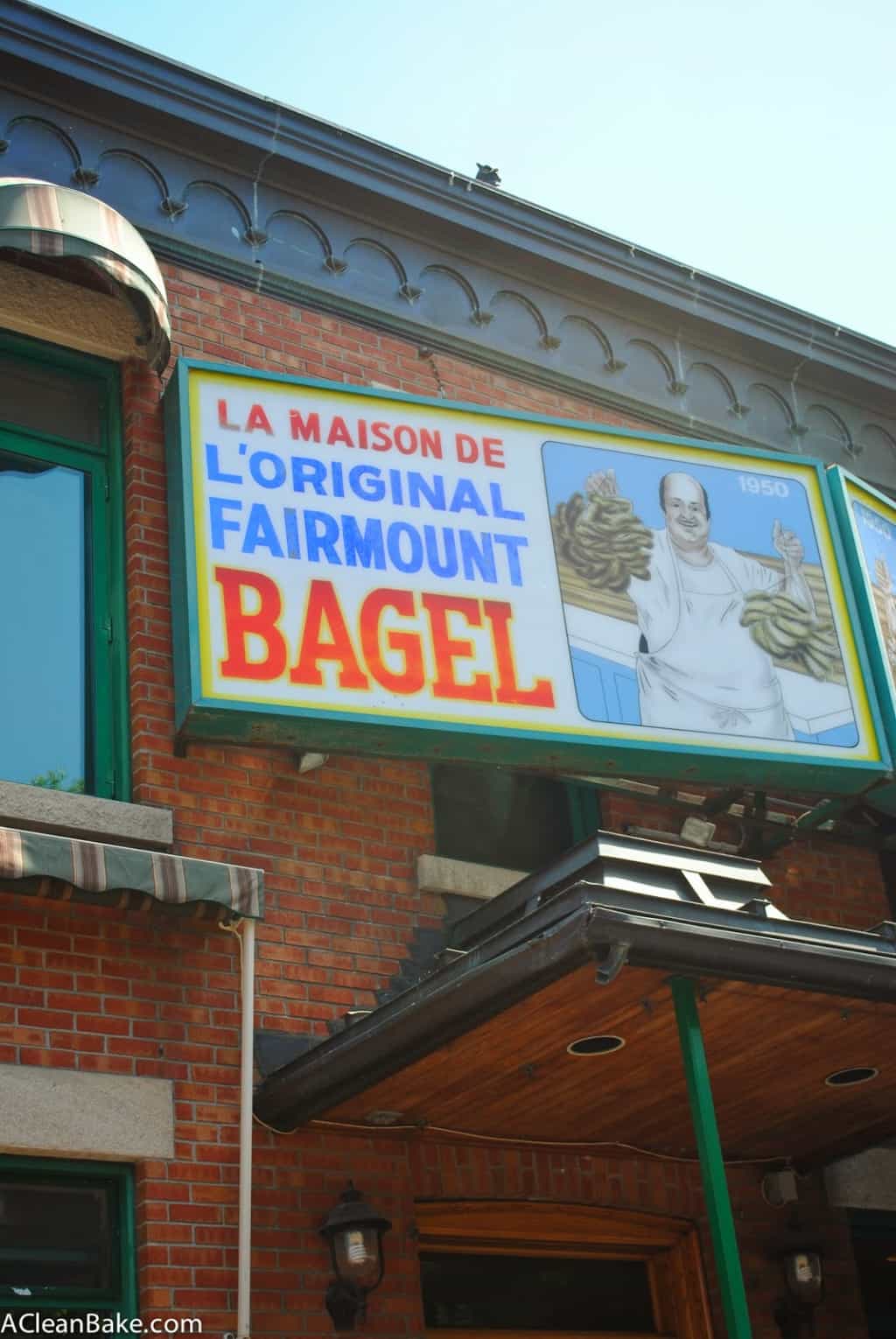 Unlike New York bagels, Montreal bagels are fired in a pizza-style oven that must be a billion degrees. The man making them (who, I think, is the same person as the guy who was pictured in the New York Times; presumably they have more than one guy making bagels, but he must be the top dog!) lines them up on a long, thin board and slides them into the oven, then retrieves them with the same board a few minutes later and flips them dramatically over his head into the orange bin to his left.
The result is a thin, chewy bagel with a tough rubbery (in a good way) exterior skin. Compared to the thick, doughy monsters in New York, this one seemed small and dainty, and it was a little sweeter than its New York equivalent. But it was truly delicious, and much better as a side with breakfast than the massive New York bagels that are a meal in and of themselves. I just don’t understand how Canadians can make a sandwich out of these (which I did see on a couple menus).
Anyway, no complaints here. I ate it, gluten and all, and it was SO worth the stomachache. Aside from it being a fun getaway in a beautiful city, the trip reminded me how much I miss a good bagel. So, I decided this must be remedied, at long last! I have been working on a gluten-free bagel and it is finally ready to share. Stop by next week for the recipe!
In the meantime, tell me about your recent or summer travel plans. Going anywhere fun?