A healthier version of your favorite taco (and mine!), these lightened up fish tacos feature an unfried tortilla, baked fish seasoned to perfection, and a light and crunchy slaw! 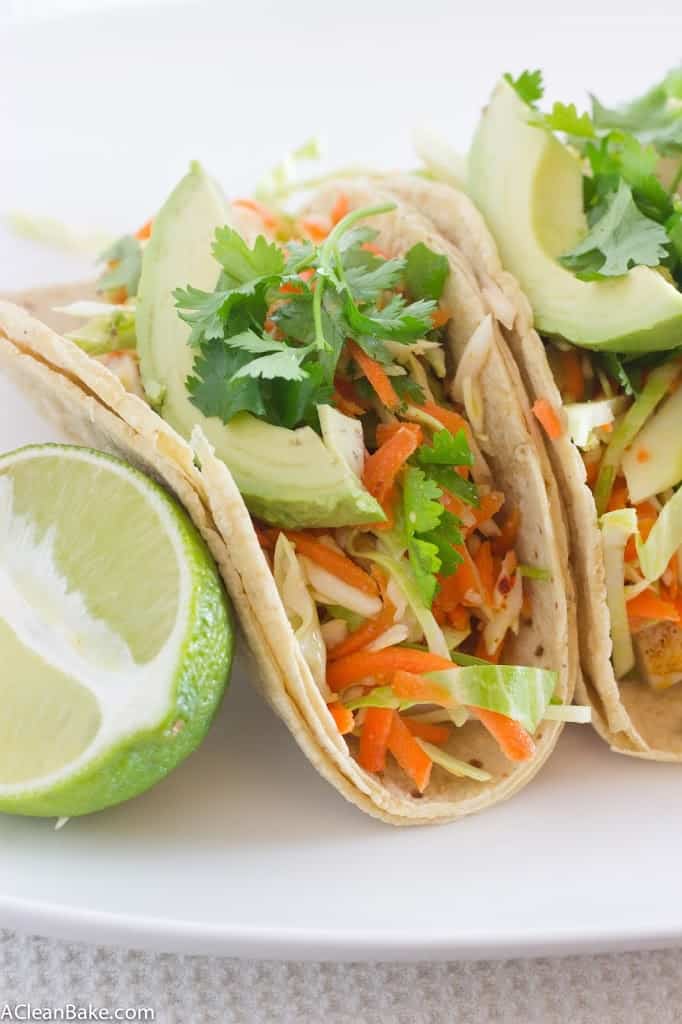 When you are back to reality after the greatest couple of weeks of your life, when you are watching snow flurries out the window and trying to resist the urge to sell your house and move to a houseboat in the Caribbean, when you’re surrounded by laundry waiting to be folded and a sink full of dirty dishes…well then it behooves you to take solace in a fish taco.
I know I should be posting things involving squash and pecans and cranberries and, believe me, there are plenty of Thanksgiving-friendly recipes on the way, but I just can’t dive in yet. To acknowledge Thanksgiving is to put the wedding chapter behind me, and I just need to hold on to it for one. more. day. So, grab a mojito and pull up a chair: we’re having fish tacos in November.
After a prolonged absence, I feel like maybe I owe you some kind of recap. But I also don’t want to be perceived as one of those people who flashes their wedding pictures around like they are the only woman who has ever gotten married. But since I spent a few days of my hiatus in Puerto Rico, let’s compromise and stare longingly at the longingly at photos of the beach…
…and the rainforest…
…and wish we were there.
I’ll be the first to admit that this is the world’s worst snapshot of a beautiful island, and I apologize to anyone who is Puerto Rican, has been there, or has even the slightest affinity for it.  I had hoped to get out of the resort to explore San Juan and eat some authentic Puerto Rican dish that I could then recreate for you, with my own twist, here. But you’ll have to forgive me, because when we arrived last Monday, I had only slept for a total of about 7 hours since the previous Friday morning, and it was pouring rain so, instead of getting out of the hotel to explore and try some of the local fare,  our “mini moon” looked mostly – between naps, that is – like the bottom of a mojito and a fist full of fish tacos. Every day.
We got a 4-hour reprieve of partial sun on Thursday that allowed us to sit by the pool and get the most imagined of tans. And of course, fish tacos by the pool, one of which I took to the beach. It was heavenly. […then the rain started up again and didn’t stop monsooning until after we left. whatever.]
So, this past week was a little rough, as we faced the backlog of chores, to-do’s and missed work to catch up on. Nothing a few fish tacos couldn’t fix, though. My biggest complaint about most fish tacos – and my biggest compliment of the ones in Puerto Rico, besides the quality of the local fish – is the completely unnecessary complexity of most recipes. Breaded, fried, over-salted, and tons of crazy toppings. In PR, they were simple: good fish, lightly seasoned, topped with a simple, fresh, crunchy slaw, an optional crema, and nothing more.
When I made my own, besides not breading or frying them – hence the lightened up part –  I added a little more heat to the seasoning (and dialed back the salt to homemade levels, as opposed to the supersonic sodium content of most restaurant food, particularly in hot climates) and added avocado which, quite frankly, doesn’t ever hurt.
The slaw was so fresh and flavorful that it pretty much stands on its own, so this recipe has some leftovers built in, or you can simply load up your tacos with slaw until you have to practically unhinge your jaw to fit the taco in your mouth.
I’ll let the tacos speak for themselves now.
Continue to Content

Ingredients for the fish

Ingredients for the slaw

If you want to finish these with a crema-type dressing, stir together about a 1/4 cup plain greek or coconut milk yogurt with a Tablespoon of lime juice and a pinch each of salt, pepper, garlic and red pepper flakes (or to taste). If it's too thick, add a few drops of water to thin it out to a pour-able consistency. Drizzle over the tacos before eating.
To make this paleo, simply skip the tortillas and eat the fish over the slaw topped with the garnishes. It's just as good - I promise!
Yield: 4-5 tacos