If eggplant salad isn’t a go-to dish in your house, it’s time to change that! Throw some sliced eggplant and halloumi cheese on the grill, or in a pan, and add it to a bed of fresh greens, crisp radishes and hearty hard boiled eggs for a meatless entree you’ll love. 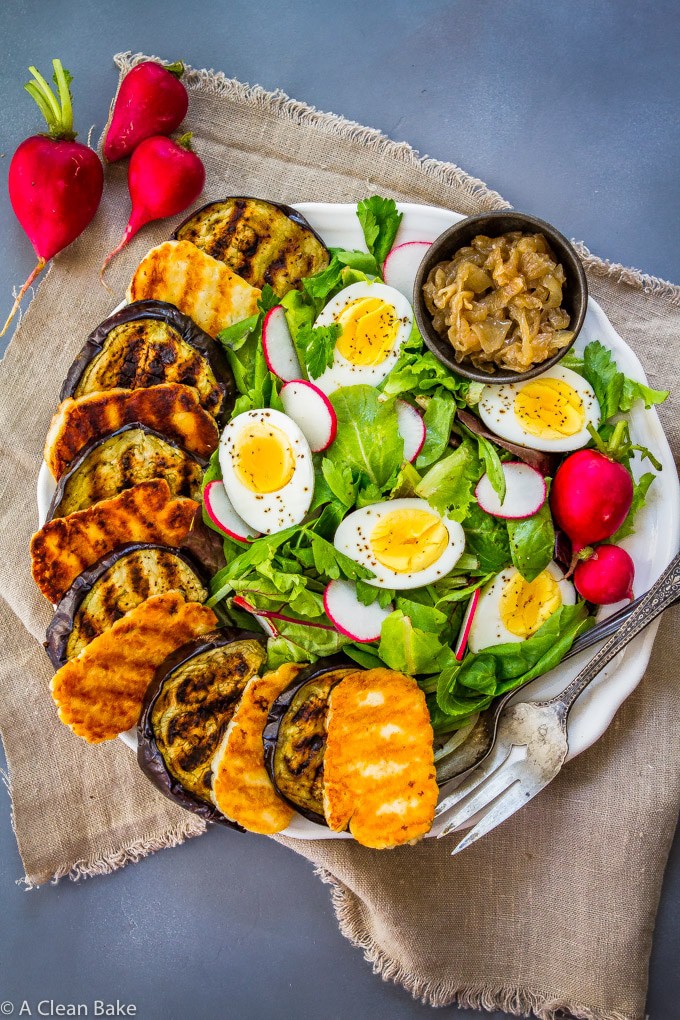 Don’t you just love recipes that, despite no planning and totally flying by the seat of your pants (or the content of your fridge), turn out to be something you’ll make again and again?

This is one of those recipes.

The other day, I had an epiphany: It was one billion degrees, we had 3/4 of an eggplant in the fridge, plus a brick of halloumi that my mom brought over because the store closest to her has it for several dollars cheaper than the store I shop at, and I really needed some vegetables. 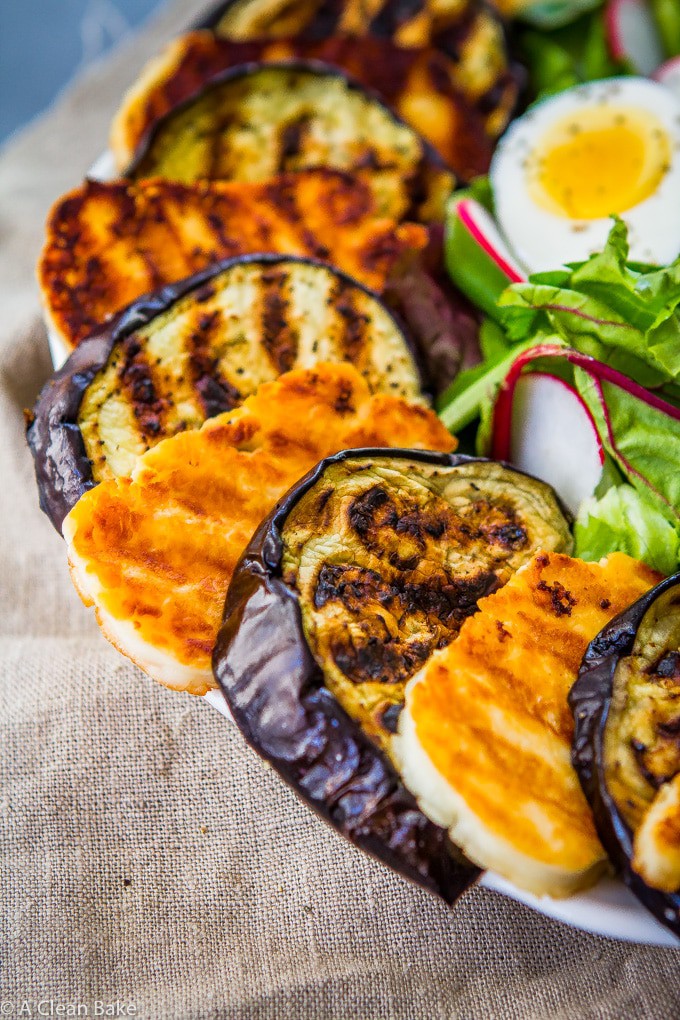 That Chicago was, for the first few days of this week, so hot that we had to pull out an auxiliary window air conditioning unit for Baby Bake’s room because the central air wasn’t doing enough, meant NO WAY was I turning on the oven to make the dinner I’d (loosely) planned. In an effort to keep the heat to a minimum – because Chicago was already one of the hottest cities on the planet, literally, so I had nothing to prove – I decided to grill.

Each time I go to the grocery store, I pick out one type of produce that Baby Bake hasn’t tried yet. Last week it was eggplant. This week, turnips. Since we’d already moved on from the eggplant (too much water, too many seeds), I thought I’d slice it up, throw it on the grill (or in a grill pan) and … what?

Halloumi! Every time I’m out in the ‘burbs, I like to go to Pete’s Market, an awesome grocery store that stocks pretty much everything you could possibly think to put on your list. 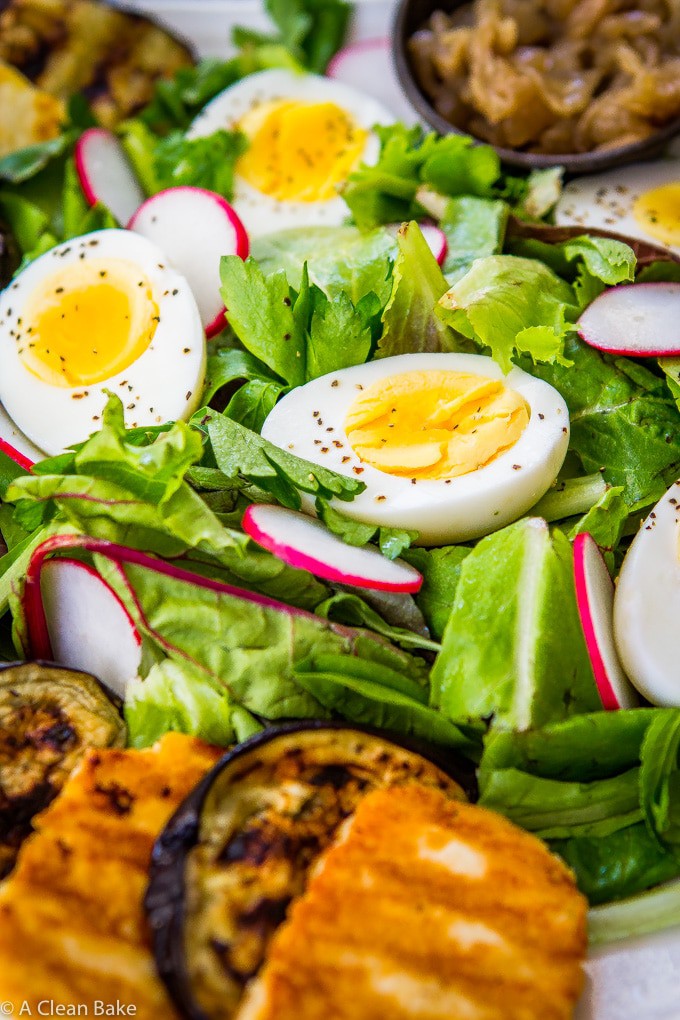 I guarantee that if you are desperately in need of a plantain-limburger-chicken sausage-homemade saurkraut smoothie, they will have you covered. Also, why?

But back to the salad. The prices are pretty good on things that are, well, not well priced at any of the yuppie grocery stores near my house. A small block of halloumi at Mariano’s is $11 (noooope.) so my mom grabbed some for me in the ‘burbs. Kinda like cheese arbitrage, if you will. But you don’t have to.

So, I threw that on the grill too, because it never ceases to entertain me to watch cheese not melt over direct heat.

It’s the same reason I like the concept of fried ice cream or baked Alaska. You know what I mean, right?

As for the salad part: I wanted a salad?

Ok, so perhaps this isn’t the most compelling story you’ve hear today, or even in the last 5 minutes, but it’s an eggplant salad, so I’m doing what I can with the material I have! ???? 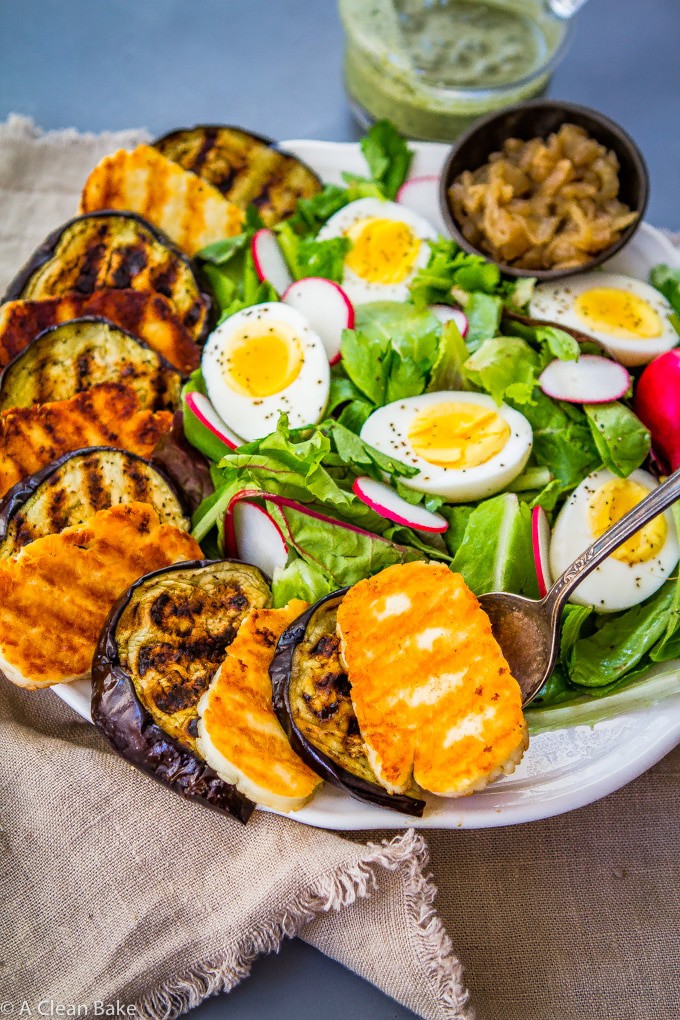 The story behind it may not be the most riveting, but the eggplant salad itself is a glorious plate of flavors, textures, and colors – as all salads should be.

The rest of the salad is simple: I had caramelized onions, and a big bunch of radishes in my fridge. On they went! And when it came time for the dressing, I decided to go a different route than usual and, in keeping with the vaguely-mediterranean theme of the salad (I guess?), made a batch of pesto with the radish greens, thinned it out, and called it dressing.

I also added hard boiled eggs for some extra fat and protein to make this as filling as possible without adding meat. Once in awhile, we remember to do Meatless Monday around here, and this happened to be one of the rare weeks we were successful!

So if you do a meatless meal once a week, this is a great option.

Even if you aren’t in it for the meatlessness, this is a great option!

The grilled eggplant and halloumi can be served hot or cold, and since it’s a salad, cold probably makes the most sense, making this an excellent make ahead/meal planning option to boot! 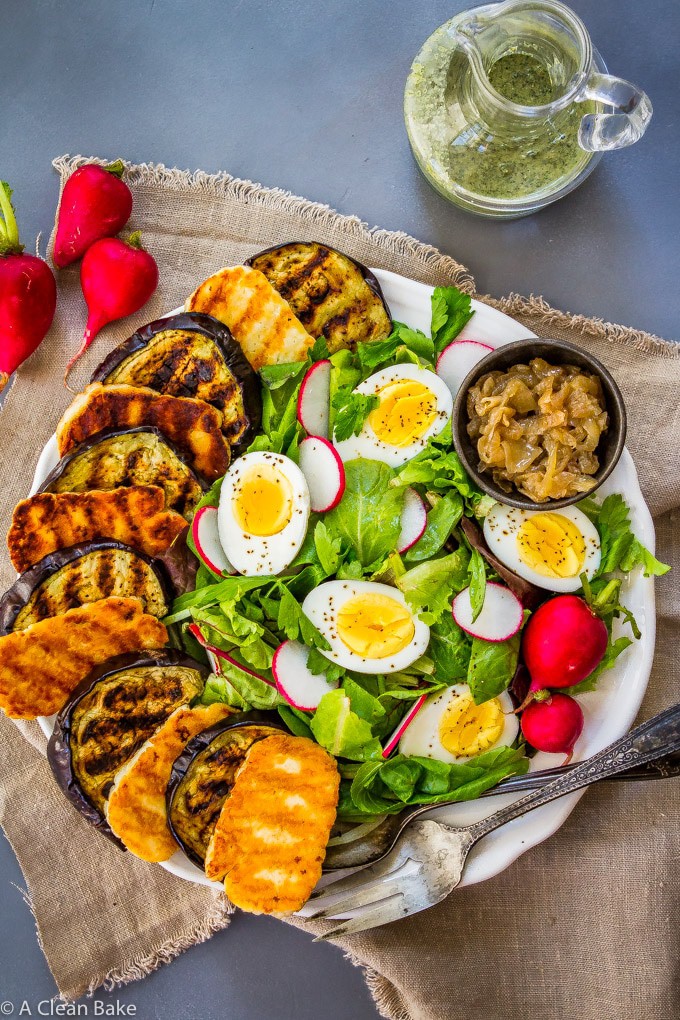 So, when I shared it on Instagram and so many of you messaged me for the recipe, I knew I had something special on my hands that needed to be shared immediately (before eggplants go out of seasons, or the price of halloumi increases – whichever comes first). Even if it doesn’t come with a very good story! ????

Ingredients for the salad:

Ingredients for the pesto dressing: