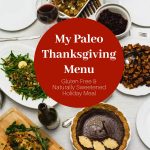 I made a whole paleo Thanksgiving meal for my family in less than 24 hours! This stress-free menu comes together the day before the holiday, and is finished in just a couple of hours before everyone sits down to eat. 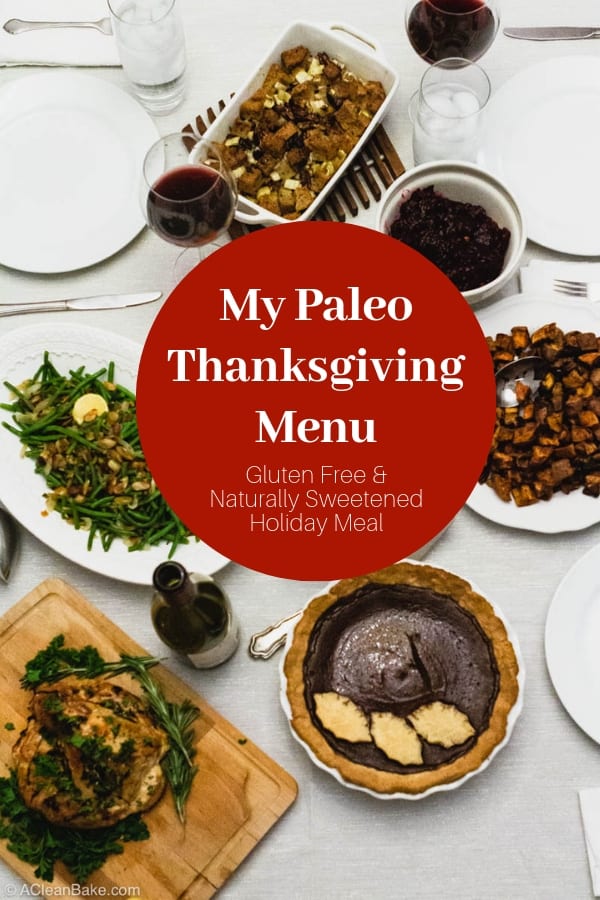 This Thanksgiving, my husband, son, and I enjoyed an intimate Thanksgiving at home with just the three (well, four, counting Henry the Cat!) of us.

There are many reasons, but it was nice to have a relaxing morning enjoying coffee and pumpkin bread with my parents and some family friends, followed by a relaxed afternoon and dinner when we were ready. Key word: RELAXED.

There was only one problem… who was going to make dinner?

Around Tuesday, it dawned on me that a major eating holiday was coming up and I had NO idea what we were going to eat. Bryan and I talked about getting the meal catered by Whole Foods, or ordering Thai food (seriously!), but in the end we both agreed that it would feel kind of strange not to enjoy something Thanksgiving-y for dinner on Thanksgiving.

I wasn’t fully unprepared. We knew staying home was a possibility, so I’d grabbed a turkey breast at the store, and thrown a few more aromatics like herbs, onion, and celery into my Imperfect Produce* box this week. Plus, we always have a bunch of sweet potatoes in the fridge.

*that’s the produce delivery service I love, and I especially love how customizable the box is each week – that really came in handy for Thanksgiving. If you want to try it, sign up at imperfectproduce.com and use code “acleanbake” for 50% off of your first box.

So, Wednesday around 2pm, I started prepping for Thanksgiving dinner. It turned out to be about 2-3 hours worth of prep on Tuesday and another hour or so right before the meal.

With just that much effort, we had a beautiful, small-bath, gluten free and paleo Thanksgiving spread to enjoy for dinner last night! 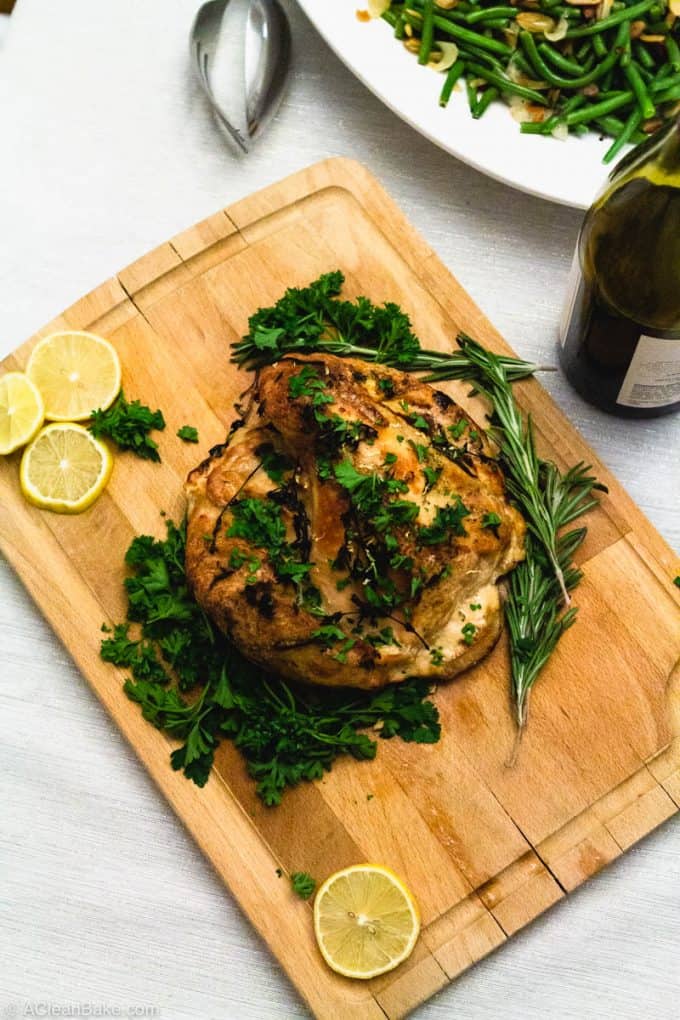 Instead of cooking a whole bird, I made a turkey breast only.

Here’s what I did:

First, I added about 1 cup chicken stock to the slow cooker bowl and then made a little bed of half an onion (sliced) and about 10 sprigs each of fresh thyme and fresh rosemary.

Then I placed the raw turkey breast on top of the bed of herbs and sprinkled it very liberally with salt and pepper all over.

Then I cut about 5-6 Tablespoons of unsalted butter (you could use olive oil or refined coconut oil instead) into large chunks and placed them all over the turkey breast. I cooked in on low for about 5-6 hours, until the internal temperature reached 165°F.

Immediately before the meal, I put it in a 450°F oven for about 5-10 minutes until the top was browned, then let it sit, tented with tinfoil, for 20 minutes to let the juices reabsorb.

I finished the bird with a sprinkle of lemon zest and minced fresh parsley before slicing.

This, and the pie, were the only things I didn’t make ahead. But you can make the bird in the slow cooker the day before, warm and crisp it in the oven before the meal. 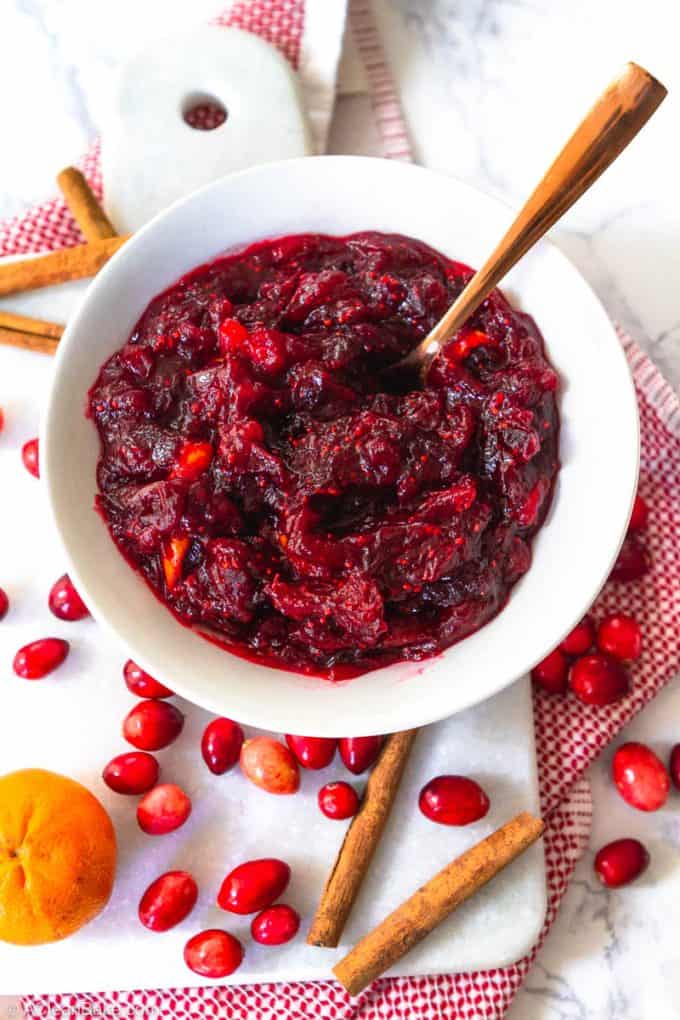 I made my new favorite paleo cranberry sauce last weekend, and (once cooled), stashed it Ball jars in the freezer. Thursday morning, I took the jars out of the freezer, and let the sauce thaw on the counter.

Since there were only a couple of hours between when it was thawed and when we wanted to eat, I simply left the jars on the counter before I put the sauce in a bowl on the table. 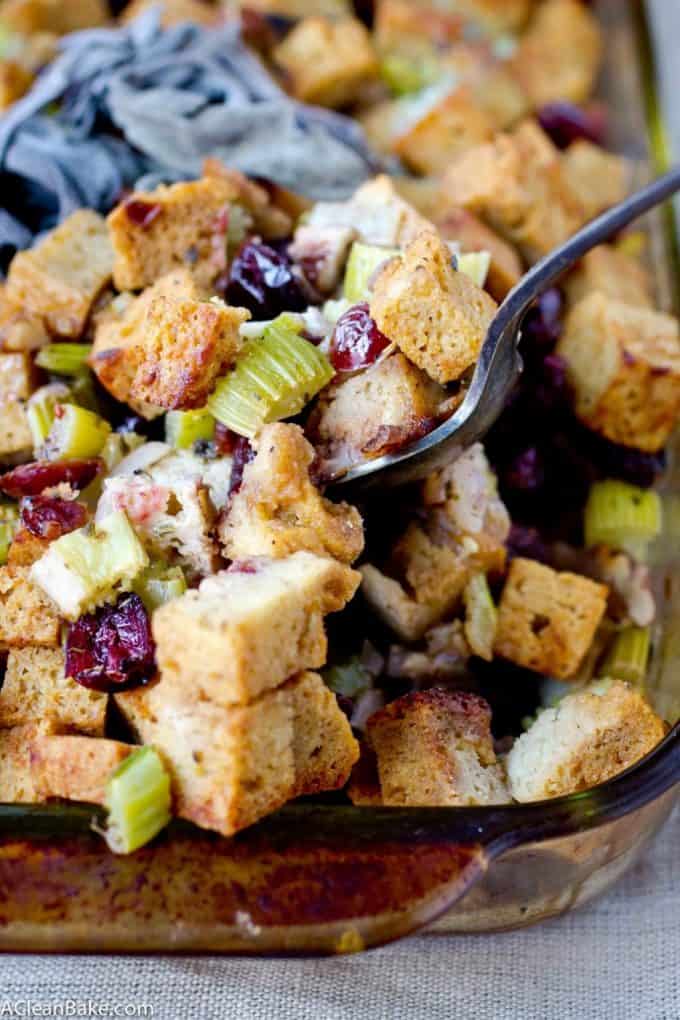 Of course, I went for my old reliable paleo stuffing recipe. However, I took a shortcut by using Simple Mills bread mix for the bread base.

I baked the cooled the bread Wednesday morning and prepped the stuffing Wednesday afternoon. You can probably make it up to a week ahead, though, and store it (tightly wrapped) in the fridge until you’re ready to make the stuffing.

I also made a half recipe, since I don’t like leftover stuffing very much (and we had sweet potatoes too). I baked it for about 40 minutes in a small (about 6″x10″) baking dish.

Once it was completely cool, I covered the stuffing in foil and put it in the fridge overnight. About an hour before our meal, I put it in a 250-300° oven (covered in foil) so it can warm up. I took the foil off for the last 5 minutes or so, so that the top got crisp again. 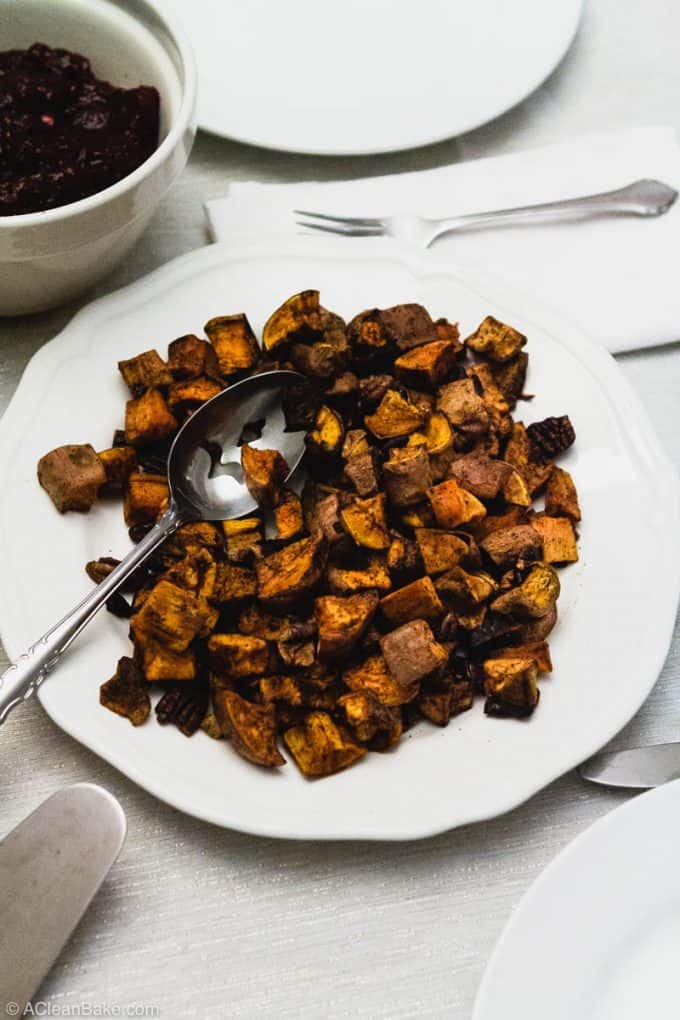 I loosely followed the recipe for roasted sweet potatoes on page 242 of Danielle Walker’s Celebrations cookbook. I won’t reprint the recipe here, since it is copyrighted (and it’s well worth buying this book – her recipes are great!). But the gist was to toss cubed sweet potatoes with chili powder, cinnamon, salt, pepper, and maple syrup, then roast with pecans.

The original recipe also called for cayenne, which I omitted since I didn’t want it to be too spicy, and bacon, which I also left out. I should note that my pecans burnt to a crisp about halfway through the baking time so I would recommend toasting them separately and tossing them with the roasted sweet potatoes after the potatoes are cooked.

Anyway, I made the potatoes Wednesday and, once they had cooled, I transferred them to storage containers and put them in the fridge. I warmed them in a baking pan (covered with foil) with the stuffing for about 10 minutes, until they were heated through. 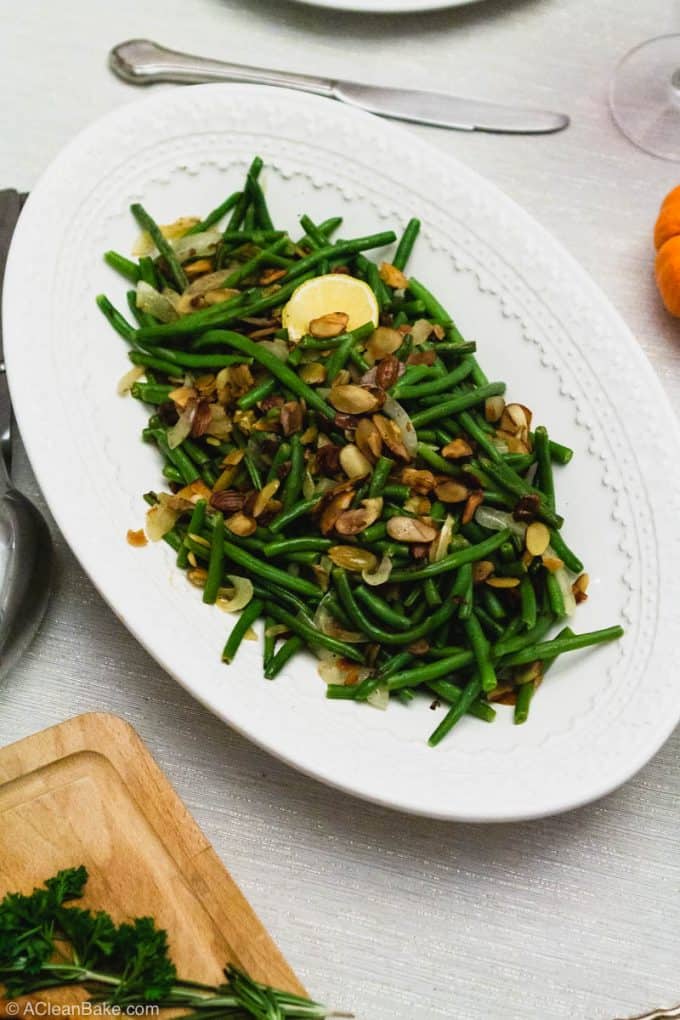 I was stumped at first on what to do for a vegetable, since I didn’t have the time (or, by this point, energy) to make my favorite holiday salad. Instead, I decided to make Haricots Verts Almondine (a fancy name for green beans with almonds), using this recipe as a guide and frozen haricots verts from Whole Foods. They’re my favorite frozen vegetable so we always have a bag of them in the freezer!

The Serious Eats recipe linked above was a little fussy so I didn’t follow it to the letter. Far from it, actually. Instead, I fried the almonds in about 3 tablespoons of olive oil until toasted and fragrant, then added half of a white onion, very thinly sliced. I also added a sprinkle (1/2 of a teaspoon or so) of granulated garlic, since I didn’t have a bulb of garlic handy.

I let the onions sweat a little bit in the oil and tossed them well to combine them with the almonds. Then I added the bag (1 lb) of beans, plus some salt and pepper (to taste), stirred to combine everything, and covered the pan to let the beans defrost and steam slightly.

But I checked often so that I wouldn’t let the beans cook too long and get soggy. When they were still somewhat crisp, I removed the pan from the heat and let them cool (they softened a bit more from the residual heat in the pan before they cooled) before storing them in an airtight container in the fridge.

In order to prep them for dinner, I reheated them in the same pan and drizzled them with some fresh lemon juice. That’s it. 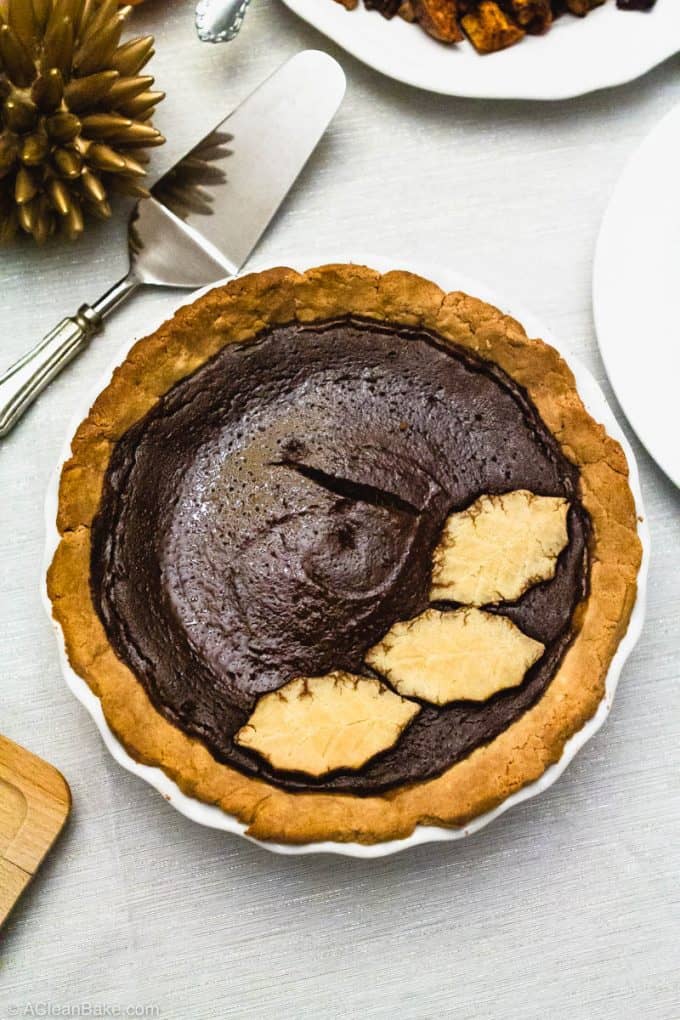 This was a last minute addition. I was going to make apple pie, but my husband loves pumpkin, so I decided to give it a shot.

I’ve never made a paleo pumpkin pie before yesterday, but I used my reliable crust recipe (which I tweaked a little so that it will yield a slightly thicker crust; I’ll share that soon) and pre-baked it for 15 minutes on Wednesday.

Once the pre-baked crust was fully cooled, I covered it with a dinner plate. I left it like that on the counter overnight.

Then, Thursday morning, I made a filling. I adapted this recipe to be paleo-friendly, which was surprisingly easy to do. But, I tried to bake the decorative crust leaves on top of the pie, and it didn’t work very well, so… that mini-experiment failed. And it took for-freakin-ever to cook so I am going to adjust a few things before I share the final version.

I hope it won’t be too late to share a pumpkin pie in December (or, let’s face it, probably January).

That was our meal! I hope you had a great one, too, and are enjoying the leftovers today!